Rosen reviews Anthony Lewis, Freedom for the Thought that We Hate 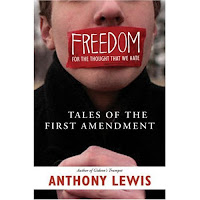 account of how courageous judges in the 20th century created the modern First Amendment by prohibiting the government from banning offensive speech, except to prevent a threat of serious and imminent harm. “Many of the great advances in the quality — the decency — of American society were initiated by judges,” he writes. “The truth is that bold judicial decisions have made the country what it is.”
It’s easy to see why Lewis came to view judges as brave protectors of First Amendment rights: he covered the Supreme Court during the Warren era, when the modern First Amendment took shape, and he recalls Justice Felix Frankfurter’s showing him an eloquent 1929 dissent by Justice Oliver Wendell Holmes Jr. that defended the free speech rights of Quakers and pacifists and that inspired the title of this book. “When I came to the final paragraph,” Lewis says, “I felt the hair rise on the back of my neck.” But this is not a comprehensive narrative history of the development of the modern First Amendment; Lewis already provided that in his 1991 book, “Make No Law.” Instead, it is a passionate if discursive essay that ranges across a variety of free speech controversies — from sedition and obscenity to hate speech and secret wiretapping. This may seem like winner’s history, but the victories Lewis celebrates remain controversial. There are persistent voices, in Europe and America, that continue to argue for suppressing hate speech on university campuses, for example; Lewis rightly applauds the fact that American courts have rejected their arguments.
All of Lewis’s proposals reflect his faith that the judiciary is well equipped to balance the value of free speech against other values (like privacy and national security) in a thoughtful and independent way. But is he too optimistic? There is a competing, decidedly less heroic account of First Amendment history, which holds that judges have always tended to reflect the public’s prejudices about unpopular speakers, and that most advances for free speech have been initiated not by judges, as Lewis argues, but by political activism. It was abolitionists, in the 1830s, who first argued that Southern states shouldn’t be able to ban antislavery tracts because of the remote possibility they might provoke an insurrection; the Supreme Court took another 130 years to enshrine the underlying principle into law. Similarly, the court began to protect political dissidents like Communists and Ku Klux Klan members in the late 1960s, not in the 1920s and 1950s — that is, only when they were no longer perceived as a serious threat by national majorities.

Lewis’s faith in judges also presumes that free speech controversies will take the same form in the future as they have in the past — namely, as legal battles between an overreaching government and the institutional press, with the judiciary as a neutral arbiter. But is this really likely? The rise of new technologies suggests that the free speech battles of the future may instead pit telecom corporations against private speakers, leaving judges on the sidelines....
In the 21st century, the heroic First Amendment tradition may seem like a noble vision from a distant era, in which heroes and villains were easier to identify. But that doesn’t diminish the inspiring achievements of First Amendment heroism. Conservative as well as liberal judges now agree that even speech we hate must be protected, and that is one of the glories of the American constitutional tradition. Anthony Lewis is right to celebrate it.
The rest is here.
Posted by Mary L. Dudziak at 1:05 PM