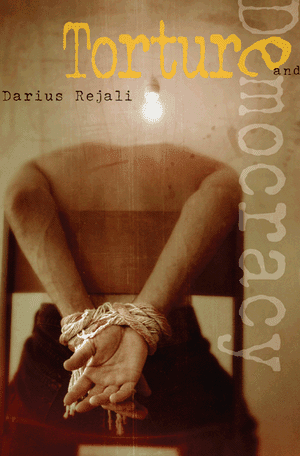 This is the most comprehensive, and most comprehensively chilling, study of modern torture yet written. Darius Rejali, one of the world's leading experts on torture, takes the reader from the late nineteenth century to the aftermath of Abu Ghraib, from slavery and the electric chair to electrotorture in American inner cities, and from French and British colonial prison cells and the Spanish-American War to the fields of Vietnam, the wars of the Middle East, and the new democracies of Latin America and Europe.

As Rejali traces the development and application of one torture technique after another in these settings, he reaches startling conclusions. As the twentieth century progressed, he argues, democracies not only tortured, but set the international pace for torture. Dictatorships may have tortured more, and more indiscriminately, but the United States, Britain, and France pioneered and exported techniques that have become the lingua franca of modern torture: methods that leave no marks. Under the watchful eyes of reporters and human rights activists, low-level authorities in the world's oldest democracies were the first to learn that to scar a victim was to advertise iniquity and invite scandal. Long before the CIA even existed, police and soldiers turned instead to "clean" techniques, such as torture by electricity, ice, water, noise, drugs, and stress positions. As democracy and human rights spread after World War II, so too did these methods.

Rejali makes this troubling case in fluid, arresting prose and on the basis of unprecedented research--conducted in multiple languages and on several continents--begun years before most of us had ever heard of Osama bin Laden or Abu Ghraib. The author of a major study of Iranian torture, Rejali also tackles the controversial question of whether torture really works, answering the new apologists for torture point by point. A brave and disturbing book, this is the benchmark against which all future studies of modern torture will be measured.
Posted by Mary L. Dudziak at 12:58 PM