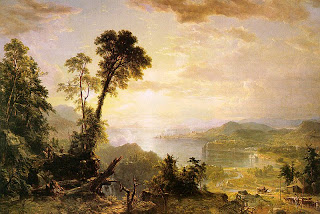 On the heels of the post on the relationship between Kyra Sedgwick and an 1830 novel featuring the auction of a landscape painting, here's something else that you wouldn't think would go together: Ian Ayers' Super Crunchers and the study of antebellum legal history.

I've been saying for years (this prediction goes back to about 1989) that full text databases of antebellum case reports will revolutionize how we think about antebellum legal history. It's been about a decade since westlaw and lexis have had the antebellum state reports on-line and so far, we're still waiting to realize their full promise. Part of this may be because legal historians have gone in so many different directions of late that we're no longer as concerned with antebellum legal history as we were in the days when Horwitz' Transformation of American Law, 1780-1860 was published. I think one of the many attractions of Horwitz was that he brought the insights of law and economics to bear on antebellum jurisprudence. Horwitz and Posner did not share a political agenda, but they shared an intellectual agenda: talking about how, throughout American legal history, economic considerations were important to judges. We're now talking more about nationality, civil rights, criminal law, women, slavery and Jim Crow, all sorts of areas that were not so hot in the 1970s and 1980s. But that's a discussion for another time.

Still, I think there are important insights--low hanging fruit to use the common phrase--to be mined from the hundreds of volumes ready for full text searching. And that's where Super Crunchers comes in, with its contagious enthusiasm for looking at large datasets.

What do I want to mine from antebellum cases? Well, lots of cool stuff to be done on webs of citations (which states are citing which states and when) and other stuff, too. But right now I'm thinking about it for a different purpose. I'm in the midst of a paper on antebellum landscape art and property law. It's tentatively titled "property and progress," with apologies to Henry George and Stephen Thernstrom, of course. Not surprisingly, Asher Durand's Progress (1853) (housed in the fabulous Warner-Westervelt Musuem in Tuscaloosa, Alabama and used as an illustration here) is a centerpiece of the talk. So I've been interested in how judges talk about progress and the even more popular nineteenth century term "Civilization." All of that led me to westlaw's old cases database, where there are nearly three hundred cases that use the word "civilization" before the Civil War. Not quite super-cruncher numbers, but perhaps enough instances to see the ways judges using the term. Seems to me we could create a pretty cool map of the terrain of judges' minds by studying such phrases. There are enough uses of the word that we can begin to see how judges use it and in what kinds of cases. There are probably a lot of other words and phrases that we might use, like sentiment, utility, expediency, feudalism.... Sort of like a small version of the amazon.com algorithm that tells me what books I should read, in light of the books I've already purchased. As Ayers' says, amazon knows more about my preferences than I do--and he's right.

Gale's Making of Modern Law series, which has more than 20,000 volumes on English and American law from 1800 to 1920 is another fabulous source. book.google.com has helped out in huge ways , too. One of the many insights here: I was interested in Bill Bojangles Robinson of late, because I was involved in a conversation with my favorite librarian about him. That led to me ask about the statue put up in Richmond back when I lived there to commemorate him. And that led me to learn that some people credited him with popularizing "copasetic" and that led me to a wikipedia entry that says copasetic was first used in 1919. But, ah, through the magic of book.google, there appears to be a use in 1914!

The difficult part, now that all this information is such much more easily available, of course, is to know what to do with it. The puts an even greater premium on interpretation, now that anyone with access to the internet can get at overwhelming amounts of text on the antebellum era. ...
Posted by Alfred Brophy at 12:52 PM