“In the three decades that followed World War I, black Southerners and their allies 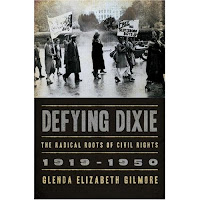 relentlessly battled Jim Crow,” Glenda Elizabeth Gilmore writes at the outset of this rich but sprawling book. Ms. Gilmore, a professor of history at Yale, wants her “collective biography of activist black and white Southerners” from that era to illuminate how resistance to the South’s elaborate system of racial segregation, often nicknamed Jim Crow after a 19th-century minstrel song, long predated the onset of traditionally celebrated civil-rights initiatives in 1954-55.

Ms. Gilmore begins her story at the end of World War I, when “the virulence of discrimination during the war and the racial violence afterward transformed African-Americans’ political consciousness” and stimulated a new generation of activists....The first focal figure in “Defying Dixie” is Lovett Fort-Whiteman, a widely traveled Texan who in 1919 became “the first American-born black Communist.” Ms. Gilmore devotes considerable attention to such early Soviet true-believers, few though they were, for “in the 1920s and 1930s the Communists alone argued for complete equality between the races,” she notes. “Their racial ideal eventually became America’s ideal.”...
Ms. Gilmore rightly stresses that even as late as the 1940s, mainstream interracial groups like the Southern Regional Council “did not endorse desegregation.” Her indictment of “the bankruptcy of moderate organizations” and moderate white Southern academics is powerful and profound....
By far the most compelling portions of “Defying Dixie” tell the life story of Pauli Murray, a black lesbian feminist whose lifelong activism began with an unsuccessful attempt to desegregate the University of North Carolina, Chapel Hill, in early 1939 and culminated with her ordination as an Episcopal priest in 1977. Ms. Murray’s application to North Carolina’s graduate school came shortly after lawyers for the National Association for the Advancement of Colored People had won its first higher-education desegregation case in the United States Supreme Court. But Ms. Gilmore reveals how the N.A.A.C.P. counsel Thurgood Marshall was unwilling to pursue Ms. Murray’s challenge because of his disquiet over both her sexuality and her past membership in a communist splinter group that opposed the Communist Party itself.

[Note: Legal historians have stressed as well a problem with the facts of the case. The most important case on point, Missouri ex rel Gaines v. Canada (1935), had involved a citizen of Missouri suing for entrance to the University of Missouri. Murray was a New Yorker suing for entrance to the University of North Carolina. According to Mark Tushnet, Marshall thought that "the state might get around Gaines by arguing that it had no constitutional duty to provide education to nonresidents." Murray had an argument that UNC should treat all non-residents equally, but Marshall "thought that this was an extension of Gaines that the NAACP should not push yet."] Garrow continues:

Eleven years went by before Marshall won a pair of Supreme Court cases that mirrored Ms. Murray’s complaint, and Ms. Gilmore muses about how costly that delay was. “Had the N.A.A.C.P. been able to win desegregation decisions in World War II America, white Southerners would have had a more difficult time mounting massive resistance in the midst of a war against intolerance,” when claims of black inferiority “seemed to have more in common with the Führer than with the Founders.”

Instead the legal confrontation took place in the 1950s, when the Southern allegation "that integrationists were Communists” carried far greater resonance than it would have a decade earlier, and when “the power of the left to implement desegregation” - as Ms. Gilmore imagines it — no longer existed.

Ms. Gilmore’s speculation implausibly presumes that the Supreme Court would have invalidated school segregation earlier than it did. She rightly emphasizes, though, how the surprising Nazi-Soviet Pact of August 1939 destroyed the left-liberal Popular Front and upended the Southern left’s argument that Jim Crow represented American fascism. Instead segregationists could use American Communists’ subservience to Moscow to tar their liberal and socialist allies as fellow travelers. When evidence of Communist complicity in Soviet espionage began to emerge after the war’s end, it was leftists, not white supremacists, who could now be painted as downright un-American.

The rest is here.
Update: More on Gilmore, with a review by Raymond Arsenault in the Washington Post. Hat tip.
Posted by Mary L. Dudziak at 8:05 AM