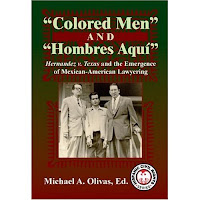 y, 1954, in an opinion written by Chief Justice Warren. It invoked race, which had been employed by the State in a way to marginalize a discrete racial group, and formulated Equal Protection. The term "Colored Men" figured in it. Brown v. Board of Education? No¿the case was Hernandez v. Texas, written at the same time as Brown, by the same Court, and was published in the 1954 Supreme Court Reports just before Brown. This criminal law companion to Brown involved all white juries in Mexican-Jim Crow Texas, and has been all-but-forgotten in the bright light accorded Brown. But its anti-subordination language, small town sociology, and bathroom signage (the men's room sign, invoked by Justice Warren, read "Colored Men" and "Hombres Aqui" (Men Here). The case was also the first case argued by Mexican American lawyers before the Supreme Court. This study draws upon previously-unexamined archival materials and newspaper accounts, as well as information from the lawyers who tried the 1954 case.
Posted by Mary L. Dudziak at 8:05 PM