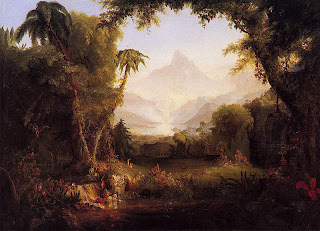 Here's something to think about when you're watching Kyra Sedgwick in The Closer: she's related to Henry Dwight Sedgwick (author of an important late antebellum treatise on Constitutional law) and Catharine Sedgwick (author of Redwood and other novels that have made a huge comeback among literary scholars in recent years.) Pretty unusual, eh? Yup. You never know what things you'll learn at legalhistoryblog to impress your friends! (Years and years ago Alan Heimert suggested that I spend some quality time with Catharine Sedgwick because she was a nice mid-way point between James Fenimore Cooper and Stowe and Melville. I hope to talk about that some more at some point, though perhaps not on this visit to legalhistoryblog.)

This post, though, is about a fragment of one of her other novels: Clarence, which I've been reading for a paper on antebellum property (there's a will contest in the novel, which is capturing some of my attention these days). In Clarence, one of Thomas Cole's landscapes is sold at auction ... at what appears a high price ($50), but is in actuality a bargain. (Been looking at some of Cole's correspondence of late and that's about what they were going for at the time. Talk about a great investment....) After the sale, the buyer refuses the audience another look because "he paid an extraordinary price for the exclusive right to look at the picture." Pretty cool stuff here--a landscape is itself turned into a commodity and then sold and the only person who has the right to look at it is the buyer. Sort of turns Emerson's talk in Nature on its head:

The charming landscape which I saw this morning, is indubitably made up of some twenty or thirty farms. Miller owns this field, Locke that, and Manning the woodland beyond. But none of them owns the landscape. There is a property in the horizon which no man has but he whose eye can integrate all the parts, that is, the poet. This is the best part of these men's farms, yet to this their warranty-deeds give no title.

Lots of stuff to make out of this, since Cole was concerned with the ways that nature was being subverted by America's economy and Sedgwick also wrote frequently about issues of law, individualism, and freedom.

I've illustrated this post with a Cole landscape from our friends at wikipedia. Back at propertyprof I spoke a little about Kyra Sedgwick and property law a few years ago.

Posted by Alfred Brophy at 4:14 PM