SELLOUT: The Politics of Racial Betrayal by Randall Kennedy, Harvard Law School (Pantheon) is reviewed in the Washington Post this weekend by Peniel Joseph, author of Waiting 'Til the Midnight Hour: A Narrative History of Black Power in America. Joseph also reviews WRONG ON RACE: The Democratic Party's Buried Past by Bruce Bartlett (Palgrave Macmillan). 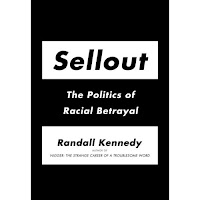 First, from the book description:

Kennedy begins his exploration of selling out with a cogent, historical definition of the "black" community, accounting precisely for who is considered black and who is not. He looks at the ways in which prominent members of that community--Colin Powell, Condoleezza Rice, and Barack Obama, among others--have been stigmatized as sellouts. He outlines the history of the suspicion of racial betrayal among blacks, and he shows how current fears of selling out are expressed in thought and practice. He offers a rigorous and bracing case study of the quintessential "sellout"--Supreme Court Justice Clarence Thomas, perhaps the most vilified black public official in American history. And he gives is a first-person reckoning of how he himself has dealt with accusations of having sold out at Harvard, especially after the publication of Nigger.

"Suspicions regarding racial betrayal continue to be omnipresent," writes Harvard Law professor Randall Kennedy in his slim but thought-provoking Sellout, which challenges conventional understanding of what exactly constitutes racial betrayal. American history is filled with instances in which prominent, successful blacks have been categorized as race traitors....

Kennedy seeks to complicate standard discussions of racial betrayal by questioning the underlying assumptions behind such accusations. Were slaves who informed about plans for impending rebellion Uncle Toms or pragmatists unwilling to sacrifice friends and family for insurrections that seemed doomed to failure?...

The book's longest section addresses the man many would consider the quintessential racial sellout: Clarence Thomas. While taking pains to distance himself from the conservative justice's legal opinions, Kennedy paints a sympathetic portrait of Thomas as an able jurist, keen thinker and, after a fashion, "race man" who cites "a greater number and wider array of black thinkers than any other justice in the history of the Supreme Court." This leads to an appropriate question: If Thomas cannot be considered a sellout, who can? Only those blacks who have purposefully tried to impugn other African Americans.

Kennedy's efforts to place a more rigorous litmus test on accusations of racial treachery are rooted in his politics and his personal experience. The book's epilogue offers his poignant admission that he has often been accused of being a race traitor, something that his penchant for describing blacks as "Negroes" will do nothing to allay. His advice to young black Harvard law students to resist the need to pay "excessive racial dues" illustrates a particular kind of unease, one that wrestles with individual ambitions versus group advancement. Kennedy's book, in effect, serves as a kind of elegy for the state of mind of a particular group of black elites forced by Jim Crow to choose group advancement but now able to follow their personal ambitions.

Both Sellout and Wrong on Race, Joseph writes,

illustrate contemporary efforts to grapple with racism's legacy. This is a daunting, even thankless, task, especially in light of the nation's unwillingness to come to terms with its history of racial slavery. Black sensitivity to racial betrayal springs directly out of that history, as does the Democratic Party's crudely effective race-baiting, echoes of which infuse the modern day Republican Party's racial pandering. These books offer illuminating evidence that, despite great marks of progress, race's stranglehold on the nation's collective conscious remains as strong as ever -- its hold on the lives of citizens, political institutions and our democracy made no less insidious by the fact that, in the post civil rights-black power era, its staying power is less openly discussed.