Peggy Pascoe, University of Oregon, Department of History, has won the Willard Hurst Prize for 2010 from the Law and Society Association for her new boo 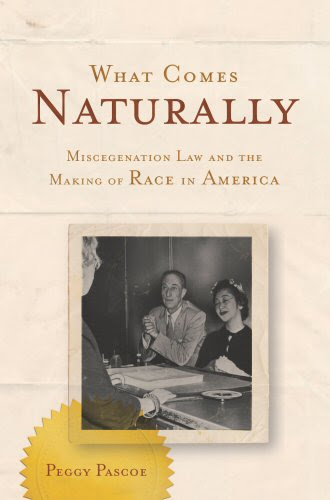 What Comes Naturally is a comprehensive, interesting, and important sociolegal history that takes us through the history of miscegenation law beyond its commonly accepted geography. It analyzes how by “naturalizing” miscegenation law, politics, religious beliefs and scientific knowledge came together to sustain a set of legal parameters that eventually became policy in the post Civil War world throughout the United States, enhancing and expanding the Black/White race dichotomy, while complicating it in gendered terms. The book is an outstanding contribution richly nuanced and insightful. It expands our understanding of conceptions of race, not only in the South, but elsewhere. It contains as well a superb elucidation of the role that gender played in the process of defining and elaborating on miscegenation.

In her study of the way in which the law defined interracial relationships as illicit sex, Pascoe also explores how ideas of sexuality and scientific knowledge intersected with social norms, to produce ideas of what was “natural” in sexual and racial relations. The book is based on an impressive body of primary sources that take us on a journey from local lawmaking and courts, into the world of immigrants and national policy makers. The writing is gracious and appealing. Pascoe makes theory come alive through analysis of the way people actually lived and thought. She opens the door to further research on the ‘creation of the ‘off-white’ America;’ expands and critiques the commonly accepted ‘natural’ dichotomy of Black and White and sheds new and welcome light on the history of law and society.