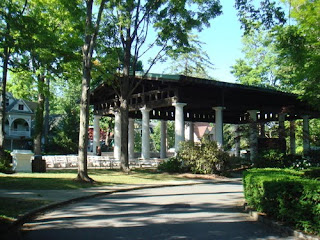 Because my wife’s family hails from Jamestown, New York, I’ve spent some pleasant days on Lake Chautauqua, including one at the Chautauqua Institution. Now comes news, courtesy of John Q. Barrett, that Jeff Shesol, the author of Supreme Power, a recent book on the Court-packing plan, will be delivering the sixth annual Robert H. Jackson Lecture on the Supreme Court of the United States, on Wednesday, August 18, 2010, at 4:00 p.m. in Chautauqua's Hall of Philosophy (right). Further, the final week of Chautauqua's summer season will feature “morning lectures on the Supreme Court, afternoon lectures on issues of justice, personal rights and Supreme Court history, and other special programming.”