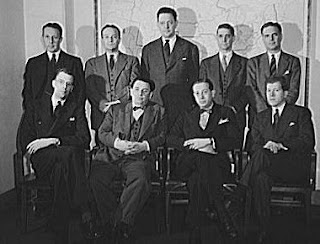 Over at the Jackson List, John Q. Barrett has posted a fine appreciation of David Ginsburg (1912-2010), whom Barrett describes as possibly "the last living official who served at senior levels in the early Roosevelt Administration." A few years back I talked to Ginsburg about his General Counselship at the Office of Price Administration, but it was clear that of all his activities he was proudest of his work for the Kerner Commission. That comes across as well in Barrett's account

In the image at right, a baby-faced Ginsburg (the joke was that the OPA's was the "kindergarten" of Legal Divisions) is seated at the far right. Other figures are John Kenneth Galbraith (seated far left), the OPA's pugnacious administrator Leon Henderson (to the right of Galbraith) and, standing in the center, Paul A. Porter, later of Arnold Fortas & Porter.

Image credit
Posted by Dan Ernst at 1:42 AM