We do not seem to have previously noted the existence of this on-line project of the Harvard Law School Library. As the website explains: 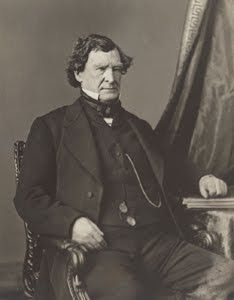 As part of its holdings of legal art and visual materials, the Harvard Law School Library owns a collection of over 4000 portrait images of lawyers, jurists, political figures, and legal thinkers dating from the Middle Ages to the late twentieth century. Although most of these prints, drawings, and photographs depict legal figures prominent in the Common Law, a significant number portray jurists and legal educators associated with the Canon and Civil Law traditions. The collection is particularly strong in images of eighteenth and nineteenth century British and American lawyers, ranging from such well known historical figures as William Blackstone, Jeremy Bentham, John Marshall, and Joseph Story to many lesser known jurists and legal educators. The collection also contains images of many graduates of Harvard College and the Harvard Law School. Librarian Eldon R. James and Dean Roscoe Pound began the collection in the first quarter of the twentieth century as an adjunct to the School's "basic collection" of paintings and sculpture. It has continued to grow significantly over the years, and today constitutes a major resource for images of lawyers and jurists that have shaped our Western legal heritage.

The collection of portrait images is the most heavily used portion of the Library's visual materials. Researchers and publishers almost daily request reproductions from this collection to illustrate scholarly articles, monographs, textbooks, Web sites, and television programs. Although the most frequent request is for reproductions of the likenesses of individuals important in the history of the law, the collection has also been consulted for iconographic images (e.g., scales of justice, blindfolded justice) and for scenes depicting judicial activity (e.g., courtrooms, assizes). Researchers in fields other than legal history may also benefit; many of the images will interest students of social history, costume, art history, and heraldry. Students of art may also find it useful as the collection covers many centuries and styles of portraiture.

I can attest that the collection makes for intriguing browsing.