Birth Control in the Connecticut Supreme Court before Griswold

Just Say No: Birth Control in the Connecticut Supreme Court Before Griswold v. Connecticut, one of my first articles, is now on SSRN. I wrote it for a symposium on state 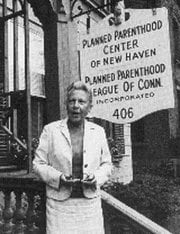 constitutional law, and it appeared in a collection edited by Paul Finkelman and Stephen Gottlieb, Toward a Usable Past: Liberty under State Constitutions, and was republished in the Iowa Law Review (1990). The abstract is below.

In the interest of making my work more accessible, I've been updating my SSRN page, so that current, published copies of these other works are now downloadable via SSRN:

The Court and Social Context in Civil Rights History (reviewing Michael Klarman, From Jim Crow to Civil Rights: The Supreme Court and the Struggle for Racial Equality)

Introduction: Legal Borderlands: Law and the Construction of American Borders

Here's the abstract for Just Say No: Birth Control in the Connecticut Supreme Court before Griswold v. Connecticut:

Beyond its importance to the history of reproductive rights, this essay illuminates the history of rights under state constitutional law. Until 1965, the United States Supreme Court largely avoided cases involving reproductive rights, with the notable exception of sterilization. Appeals to the Supreme Court in cases involving constitutional challenges to state restrictions on contraceptives were regularly dismissed for want of a substantial federal question or due to lack of standing, so that substantive rulings in birth control cases were confined to the state courts and, on questions of federal law, to the lower federal courts. Because the Supreme Court did not hear these cases, the right to use birth control was determined by state law until 1965, when the Court decided Griswold v. Connecticut. Consequently, an examination of this area of law enables us to see the independent treatment of constitutional rights by one state court without meaningful input from the U.S. Supreme Court.