High Crimes and Misdemeanors during the Battle of the Potomac

Since my earlier post, prompted by an essay by John Q. Barrett on the New Dealer David Ginsburg, I have happened upon my notes from Ginsburg's official file at the Franklin Roosevelt Library, which I took while researching his service as general counsel of the Office of Price Administration during World War II. 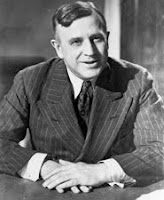 The most interesting note is on the encomium of Ginsburg by Prentiss Brown (left), an ex-Senator from Michigan who briefly served as the OPA’s administrator. Although Brown might have been expected to distance himself the New Dealer, his letter to the president, written in March 1943, as the young lawyer, denounced in the press as a draft dodger, was seeking an Army post, was surprisingly warm. Brown urged Roosevelt to assist Ginsburg in what I know is a very great crisis in his life.” At OPA he was “the best-informed man on the general subject of price control with whom I have had any contact” and had “given remarkable service to the government of the United States.”

When Brown replaced the New Dealer Leon Henderson, Ginsburg had given “some very good reasons” why he ought to step down as well. Looking back, Brown saw his point. “David is young and in my judgment a little too strongly criminal-enforcement minded.” Moreover, “because he has brought so many lawyers into OPA,” he “would find great difficulty in going along with my policy of letting lawyers go. I think they have clogged up OPA.” But although the two had thus differed on the lawyers’ role in OPA, they had done so “with the warmest mutual admiration for each other.”

In closing, Brown urged Roosevelt not to give much credence to the complaints of congressmen. “I know the Congress pretty well. I was in it for quite a while,” he reminded the president. “There are able, patriotic men, mediocre men, and some who are merely intolerant in it. In the minds of this latter group David is guilty of high crimes and misdemeanors. The crimes are, first, he is a Jew; second, he is smart. The misdemeanor is that he is a graduate of Harvard Law School.”

Roosevelt recommended to Secretary of War Henry Stimson that Ginsburg be sent to Officer Candidates School upon completing basic training. For the rest, see Barrett’s appreciation.

Image credit
Posted by Dan Ernst at 1:05 AM