Rakove on the Founders, Bunker on the Pilgrims, and more in the book reviews

REVOLUTIONARIES: A New History of the Invention of America by Jack Rakove is reviewed this weekend in the New York Times. Virginia DeJohn Anderson

Alexander Hamilton, eulogizing the renowned general Nathanael Greene in 1789, claimed that without the American Revolution, Greene's true genius might never have been revealed. Jack Rakove, a Pulitzer Prize-winning historian at Stanford University, applies Hamilton's insight about Greene to the entire cohort of Revolutionary leaders in his elegantly written new book. Part collective biography, part narrative history of the years 1773 to 1792, "Revolutionaries" adeptly explores the factors that led these remarkable men to reject British sovereignty and create a new nation. "The Revolution made them," Rakove asserts, "as much as they made the Revolution."

Making Haste From Babylon: The Mayflower Pilgrims and Their World: A New History by Nick Bunker is taken up in The Book (New Republic). David Wallace-Wells writes: 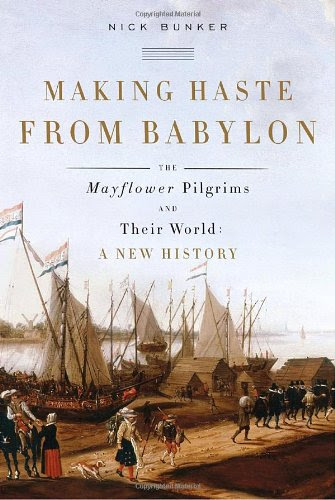 book is devoted to the premise that we distort the Pilgrims in our conventional historical accounts, which presents them as embryonic Americans rather than as expatriate British. But in emphasizing their rugged entrepreneurship, Bunker makes the same mistake himself, reading a capitalistic American afterlife into the chaotic experience at Plymouth—and indeed all the way back into the “frontier” of the Pilgrim quadrilateral. The fur trade may have secured the fate of the colony--a story told more authoritatively in Eric Jay Dolin's "Fur, Fortune, and Empire"--but, as Bunker himself allows, the Puritan success with pelts was improvised and inadvertent, and the beaver boom that buoyed Plymouth fortunes lasted only ten years. When it ended, the original Pilgrims and the “Great Migration” greenhorns who had followed them “blundered” into cattle ranching, and found themselves already settled on land — the salt marsh wetlands of coastal Massachusetts—remarkably well-suited to the undertaking. The Pilgrims may have been entrepreneurs—in Scrooby, at Boston—but the success of their colony was not entirely an entrepreneuri

al one. They got a little help from providence, too.

Also reviewed this week: THE GREAT SILENCE: Britain From the Shadow of the First World War to the Dawn of the Jazz Age by Juliet Nicolson in the New York Times; HUNTING EVIL: The Nazi War Criminals Who Escaped and the Quest to Bring Them to Justice by Guy Walters in the Washington Post; The Party: The Secret World of China's Communist Rulers by Richard McGregor in the Washington Post; THROUGH THE HISTORY OF THE COLD WAR: The Correspondence of George F. Kennan and John Lukacs, edited by John Lukacs, in the New York Times; and The Ghosts of Martyrs Square: An Eyewitness Account of Lebanon's Life Struggle by Michael Young in The Nation.
Posted by Mary L. Dudziak at 9:30 AM