Bickel on Learned Hand, "Hanoi Jane," and more in the book reviews

"The courts seldom if ever apply their check- the wisdom of the intricate rules touching their jurisdiction prevents it-while passion is at its height,” constitutional scholar Alexander Bic

kel wrote in an essay on lectures delivered by Judge Learned Hand in 1958, reprinted online at The New Rebublic.

Their judgment comes later, when at least some degree of hindsight has lengthened everyone's view. Of this, the recent actions of the Supreme Court in curbing some of the excesses of the McCarthy era-in 1956, not 1952-are a striking instance.....

In sum, their insulation and the benign influence of time give courts the opportunity to appeal to men s better natures, to call forth their aspirations, which but yesterday were forgotten, but were not necessarily abandoned in the moment's hue and cry.

Also in the New Republic, Jack Rakove reviews The Liberty Bell by Gary B. Nash and Marie Gottschalk reviews Texas Tough: The Rise of America's Prison Empire by Robert Perkinson.

HANOI JANE: War, Sex, and Fantasies of Betrayal by Jerry Lembcke is reviewed in the Boston Globe. Michael Kenney writes that the author “argues that ‘the creation 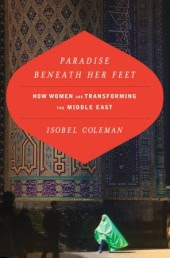 of Hanoi Jane as a betrayal figure may derive less from anything the real Jane Fonda did in Hanoi than from the needs of those who constructed the image and kept it alive.’ Hanoi Jane was used as a scapegoat, a person to blame for the American defeat in Southeast Asia.”

AT THE EDGE OF THE PRECIPICE: Henry Clay and the Compromise That Saved the Union by Robert V. Remini, and HENRY CLAY: The Essential American by David S. Heidler and Jeanne T. Heidler are reviewed in the New York Times.

PARADISE BENEATH HER FEET: How Women Are Transforming the Middle East by Isobel Coleman is reviewed in the Washington Post.

Photos: Alexander Bickel.
Posted by Mary L. Dudziak at 1:20 AM