The View from Vanderbilt

Here’s a call for historians of the legal profession, legal education, administrative law, judicial administration, and state courts in the mid-twentieth-century United States to consider making time to consult the papers of Arthur T. Vanderbilt (1888-1957) at Wesleyan University. Vanderbilt’s correspondence is very much that of a busy lawyer. He rarely revealed much of his personality in his letters. When he did, one finds nothing like the learning, the restless curiosity, or the penetrating intellect of, say, Felix Frankfurter. Still, I can’t think of another collection (other than Frankfurter’s) that provides as wide a view of the intersection of law, politics and the profession in the 1930s and 1940s. If the vantage point is centrist or perhaps a degree or two right of center, that just makes the perspective all the more novel and revealing.

Vanderbilt was born in Newark, New Jersey. He was educated in the city's public schools, at Wesleyan University (where he was very much a Big Man on Campus), and at the Columbia Law School, from which he graduated in 1913. Soon he was building a successful practice in Newark and lecturing at night to NYU law students. (He would serve as NYU’s dean from 1943 to 1947.) In 1919 he became president of the Essex County Republican League, which he made a force for “Clean Government” in New Jersey. He fought a running battle with Jersey City’s Boss Frank Hague, included representing the Socialist Norman Thomas in his attempt to speak in the city. (Papers on Hague v. CIO survive in box 127 of the collection.) Vanderbilt demonstrated an abiding interest in judicial administration as early as 1930, when he became chair of the New Jersey Judicial Council. He would make the reform of the state’s antiquated judiciary his great cause as Chief Justice of New Jersey’s Supreme Court (1948-1957). G. Alan Tarr’s able appreciation suggests, to me at least, that Vanderbilt’s contributions to judicial reform were his greatest achievement. 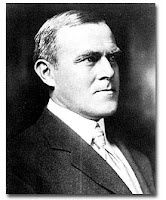 My own foray into the papers stayed close to Vanderbilt’s ABA presidency (1937-38). Even so, I saw much of interest. As president, Vanderbilt strongly supported the New York lawyer Grenville Clark (left) in his bid to create an ABA Committee on the Bill of Rights. “Here is the one issue on which all Americans should agree,” he argued, “ yet, strangely enough, this time it is the conservatives who have gone sour. Mr. Clark, as an admitted conservative, has endeavored to set them straight.” I also spotted a young Lewis F. Powell’s dutiful reports on the doings of the Junior Bar Section, displeasure over the legal realist Max Radin’s commissioned history of the ABA, dispatches from the campaign for an Administrative Office of the United States Courts, spadework for Lloyd Garrison’s survey of the economics of the legal profession, the Baker Report on publicity and fair trial in the Lindbergh kidnapping case, and the demand of Harold Ickes, Franklin D. Roosevelt’s Interior Secretary, that the ABA disclose the expenses it incurred in surveying the profession on the Court-packing plan (on which see a classic essay by Stephen Botein).

The most dramatic material related to a split in the American legal profession. Although I’ve worked in the National Lawyers Guild’s papers at NYU and Berkeley and read Percival Roberts Bailey’s very thorough dissertation, “Progressive Lawyers: A History of the National Lawyers Guild, 1936-58” (Rutgers University, 1979), I don’t recall seeing firsthand reports of the organization of Guild chapters (passed along by the ABA’s spies). I first encountered the alarm and rage of William Ransom, another ABA president in the 1930s, over the appearance of the Guild in the correspondence of Newton D. Baker at the Library of Congress. Between the ABA and NLG, Ransom wrote, there could only be “war to the knife, and knife to the hilt.” He also counseled Vanderbilt to resist the challenger. “The Guild will sooner or later kill itself off by its political, non-professional propaganda activities as a mouthpiece of the Left Wing,” Ransom predicted, or it might “become a new and hardly more reputable or effective Civil Liberties Union.” In any event, the Guild could not survive the coming of a Republican presidential administration, as that “would separate most or many of its member from the public payroll.”

I thought that where Roscoe Pound stood in the conflict would have been obvious to anyone. An exchange forwarded to Vanderbilt shows that I was wrong. In January 1938, as Pound labored on his report for the ABA’s Special Committee on Administrative Law, Alexander Hamilton Frey, a professor of the University of Pennsylvania, proffered him the presidency of the Guild. Frey confided that the Guild had been founded as a “national organization of lawyers with a liberal viewpoint” to counter “the reactionary policies and practices of the American Bar Association.” In declining, an offended Pound observed that his father had been a charter member of the ABA and that he himself had been connected with the organization for over a generation. The Guild, Pound implied, was trying to change the law “violently without appealing to the rank and file of the profession.” This was grave error. “I venture to think I am as liberal as most of those who are identifying themselves with your movement,” Pound concluded. “But I do not understand that liberalism requires one to tilt with windmills, or to attempt to bring about needed liberalization in any other way than the employment of reason.”

Vanderbilt had recruited Pound to chair the administrative committee and shared the former Harvard law dean’s alarm over administrative agencies’ challenge to the common law. He published on the subject while president and called for the reform of administrative procedure in his address to the House of Delegates in July 1938. His papers provide significant views of the bar’s campaign for administrative reform after his presidency. He served on the Attorney General’s Committee of Administrative Procedure and joined in a minority report that called for a code of administrative procedure. “We have got to get the bar and businessmen as stirred up over the present situation as they were over the Walton Logan Bill [vetoed by FDR in December 1940] or we will get nowhere,” he urged a comrade-in-arms, the University of Michigan law professor E. Blythe Stason. Other files show Vanderbilt kibitzing on the selection of chief counsel for wartime congressional investigatory committees; following the progress of a model code of administrative procedure for the states and the Administrative Procedure Act in Congress; writing a casebook, lecture notes, and annual surveys on administrative law as an NYU professor and dean; and working on the relevant report of the Hoover Commission in the 1950s.

A letter from the Wisconsin lawyer Carl Rix, written in 1943, was particularly arresting. Rix protested to Vanderbilt that the chair of the ABA’s administrative law committee, Carl McFarland, ought not to have called a halt in the campaign for administrative reform. McFarland “is oblivious of the fact that great, new, powerful agencies like OPA [Office of Price Administration] are being built up which will have control of rationing and prices long after the war,” Rix complained. “These organizations are not going to terminate with this war. Habits of action will have grown up which will be almost impossible to eradicate.” Compare Tocqueville’s warning:

War does not always give over democratic communities to military government, but it must invariably and immeasurably increase the powers of civil government; it must almost compulsorily concentrate the direction of all men and the management of all things in the hands of the administration. If it does not lead to despotism by sudden violence, it prepares men for it more gently by their habits.

I suspect that English legal historians are more familiar with Vanderbilt’s papers than Americanists, because of the extensive material Vanderbilt gathered on Lord Mansfield. But for the thoughtfulness of a colleague, the Mansfield scholar James Oldham, I would have overlooked the collection. If you see any of your own research interests in the foregoing, I believe you’d find it as revealing as I did.

Image credit: Grenville Clark
Posted by Dan Ernst at 4:54 AM