This week’s mail brought a paperback copy of the latest book by Andrew Fede, Roadblocks to Freedom: Slavery and Manumission in the United States South, from Quid Pro Press.  It is available in multiple formats, including reasonably price paperback (list $38.99) and hard cover (list $56.99) editions and as an ebook for Kindle, Nook and Apple.  We've noted the publication of other Quid Pro books before (here and here).  The book design is no-frills, but the press looks to be an excellent option for important but hard-to-publish scholarly monographs.

To the book itself: 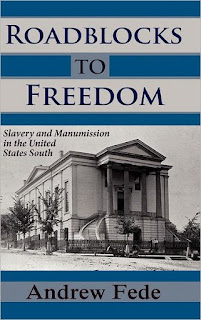 Andrew Fede's new book considers the law of freedom suits and manumission from the point-of-view of legal procedure, evidence rules, damage awards, and trial practice—in addition to the abstract principles stated in the appellate decisions. The author shows that procedural and evidentiary barricades made it increasingly impossible for many slaves, or free blacks who were wrongfully held as slaves, to litigate their freedom. Even some of the most celebrated cases in which the courts freed slaves must be read as tempered by the legal realities that the actors faced or that the courts actually recognized in the process.

Slave owners in almost all slave societies had the right to manumit or free their slaves. Slavery law also permitted people to win their freedom if they were held as slaves contrary to law. Fede provides a comprehensive view of how some enslaved litigants won their freedom in the court—and how many others, like Dred and Harriet Scott, did not because of the substantive and procedural barriers that both judges and legislators placed in the way of people held in slavery who sought their freedom in court.

From the 17th century to the Civil War, Southern governments built roadblock after roadblock to the freedom sought by deserving enslaved people, even if this restricted the masters' rights to free their slaves or defied settled law. They increasingly prohibited all manumissions and added layers of procedure to those seeking freedom—while eventually providing a streamlined process by which free blacks "voluntarily" enslaved themselves and their children.

Drawing on his three decades of legal experience to take seriously the trial process and rules under which slave freedom cases were decided, Fede considers how slave owners, slaves, and lawyers caused legal change from the bottom up.

"ROADBLOCKS TO FREEDOM is the most comprehensive study of the law of manumission ever written. Andrew Fede has examined and analyzed hundreds of cases and statutes from the antebellum South, and provided a coherent framework for understanding the complex legal issues that arose when masters tried to voluntarily free their slaves. This book provides a solid and important resource for all scholars in the field. All of us in the field are indebted to Fede for this tremendous research and analysis."
- PAUL FINKELMAN, President William McKinley Distinguished Professor of Law, Albany Law School
Author, Slavery and the Founders (2001)

"In ROADBLOCKS TO FREEDOM, Andrew Fede has given us a comprehensive look at one of the more troubling issues in the legal history of the United States. While we are all aware that American law supported slavery, Fede gives us a detailed look at how often the law was hostile to manumission. This is a well researched study that will prove to be of considerable value to students of law and history alike."
- ROBERT J. COTTROL, Harold Paul Green Research Professor of Law and Professor of History and Sociology, The George Washington University.  Coauthor, Brown v. Board of Education: Caste, Culture and the Constitution (2003)

"ROADBLOCKS TO FREEDOM is a must read for anyone interested in the legal history of slavery in the American South. Exhaustively researched, the study picks apart, categorizes, and contextualizes hundreds of cases and statutes addressing the efforts and abilities of slaves to obtain their freedom and of masters to manumit those they held in bondage. Fede's comprehensive analysis is matched only by his careful attention to detail, painting a deeply nuanced picture of the competing social, political, economic, and legal interests at play when a slave's potential for liberty was at stake."
- JASON A. GILLMER, Professor of Law and John J. Hemmingson Chair in Civil Liberties, Gonzaga University
Posted by Dan Ernst at 11:00 AM