McGerr at YLS on "A Lancastrian Mirror for Princes" 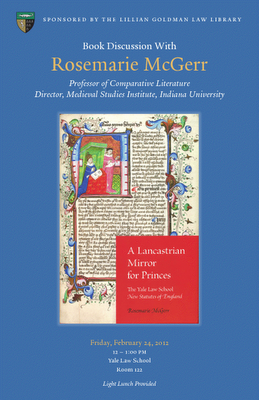 The Lillian Goldman Law Library of the Yale Law School iss sponsoring a discussion with Rosemarie McGerr, Professor of Comparative Literature and Director of the Medieval Studies Institute at Indiana University, of her new book, A Lancastrian Mirror for Princes: The Yale Law School New Statutes of England.  It will take place in Room 122, Yale Law School, on Friday, February 24, from 12 to 1.  For more information, contact Michael Widener: mike.widener at yale.edu.


This seminal study addresses one of the most beautifully decorated 15th-century copies of the New Statutes of England, uncovering how the manuscript's unique interweaving of legal, religious, and literary discourses frames the reader's perception of the work. Taking internal and external evidence into account, Rosemarie McGerr suggests that the manuscript was made for Prince Edward of Lancaster, transforming a legal reference work into a book of instruction in kingship, as well as a means of celebrating the Lancastrians' rightful claim to the English throne during the Wars of the Roses. A Lancastrian Mirror for Princes also explores the role played by the manuscript as a commentary on royal justice and grace for its later owners and offers modern readers a fascinating example of the long-lasting influence of medieval manuscripts on subsequent readers.