Judge's Bartle's History of His Court 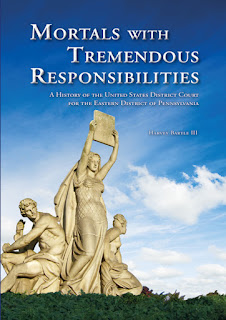 This book recounts for the first time the compelling story of the United States District Court for the Eastern District of Pennsylvania which traces its history back to 1789 and the Judiciary Act signed by President George Washington. The Court's first judge was Francis Hopkinson, a signer of the Declaration of Independence. Highlighted in the book are the Court's judges, its important cases, and the growth and changes in its jurisdiction, workload, and administration over more than 220 years. This history serves as a reminder of the consequential role that this and the other federal trial courts play in our constitutional system of government even though as Alexander Hamilton noted in No. 78 of The Federalist, "the federal courts possess neither the power of the purse nor the power of the sword."

Alexis de Tocqueville wrote in Democracy in America after his visit to the United States in the 1830's, "scarcely any political question arises in the United States that is not resolved, sooner or later, into a judicial question." Time and time again, matters which began as political questions in America have ended up before this and other federal trial courts. This book describes some of these matters. Over the years, the judges in the Eastern District of Pennsylvania have had to grapple with a myriad of issues including sedition, treason and espionage, slavery, military enlistment, seizure of ships during wartime, draft evasion, prohibition, monopolies, free speech, religious freedom, and separation of church and state. More recently, they have faced cases involving civil rights, racial and gender employment discrimination, political corruption, organized crime, prison conditions, and abortion, among others. One of the Court's judges years ago aptly described a judge as a mortal with tremendous responsibilities. This telling observation has been adopted as the book's title.

The Court, which was one of the original thirteen federal district courts, had only one authorized judgeship until 1904. The number of judges and the Court's workload have greatly expanded since that time until it is now one of the largest and busiest of the ninety-four federal trial courts in the United States. For more than a century and a half, all of its judges, who have lifetime appointments, were white males. Today, the Court is comprised of a diverse group of men and women who more nearly reflect the population of America.