A New Edition of Greenhouse and Siegel's "Before Roe v. Wade"

Linda Greenhouse and Reva Siegel, Yale Law, have posted, in its entirety, their documentary history, Before Roe v. Wade: Voices that Shaped the Abortion Debate before the Supreme Court's Ruling, on which see here and here.  Here is the abstract: 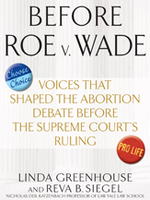 We post here a new edition of our book, a documentary history of the debate over abortion that took place during the decade before the Supreme Court rendered its decision in Roe v. Wade.

First published in 2010, the book collects a wide range of primary sources, many never before publicly available, that illustrate the dynamic of conflict in the period before Roe. These sources show how growing popular support for decriminalization elicited counter-mobilization; how each side appealed to constitutional arguments in the legislative arena before turning to the courts; and how the Republican Party during the 1972 presidential campaign began to adopt anti-abortion arguments as a way of recruiting traditionally Democratic Catholic voters. In short, much of the conflict typically ascribed to Roe began during the years leading up to the decision.

What difference does it make to study the abortion conflict in the decade before the Supreme Court ruled? This 2d edition of our book features, as a new Afterword, the full text of an essay we published in 2011 that explores questions about constitutional law and politics provoked by this “reframing” of Roe. Before (and After) Roe v. Wade: New Questions About Backlash traces the escalation of the abortion conflict at a time when courts played little part, investigating the important role played by movements, religious institutions, and, in particular, the political parties in shaping abortion’s meaning, associations, and increasingly central role in polarization.

The conventional assumption is that adjudication shut down politics and that polarization resulted. The history we uncover suggests that many institutions fueled politics around abortion in the years before Roe -- a period in which we can see the seeds of polarization before the Court ever ruled. Our account raises questions about the conventional backlash narrative, with its court-centered emphasis on the supposed perils of adjudication, a narrative that is a virtual commonplace today. When Federal District Judge Vaughn Walker, presiding over the Proposition 8 trial, asked the lawyer for the gay couples challenging California’s ban on same-sex marriage whether the danger was “not that you’re going to lose this case, either here or at the Court of Appeals or at the Supreme Court, but that you might win it,” the judge was making reference to Roe v. Wade and reflecting the belief that the Court’s decision ignited conflict over abortion. It is a view, we argue, that is as incomplete as it is widely held.