Just out from Cambridge University Press is some essential reading for the legal historians of the American state: The Unwieldy American State: Administrative Politics Since the New Deal, by Joanna L. Grisinger, Northwestern Legal Studies.  I've long benefited from having read earlier versions of the book.  It's nice to know that other scholars can now learn from Grisinger's work.

Here is the CUP’s description: 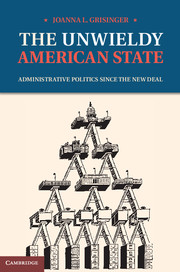 
"In this wonderful book, Joanna Grisinger chronicles the political battles over the administrative state in postwar America. Her story of the changing critiques of the federal bureaucracy convincingly demonstrates how Americans came to accept the reality of an enormous, federal administrative apparatus, while at the same time remaining skeptical of its abilities. Grisinger tells this story with lucid prose and an eye for humor amidst the bureaucratic and political wrangling. It is a truly marvelous achievement." – Reuel Schiller, Professor of Law, University of California, Hastings College of the Law

"The Unwieldy American State is a smart and perceptive study of the politics of administrative law and the legal history of administrative politics. With this work, Joanna Grisinger illuminates the legal and administrative changes that helped shape the trajectories of liberalism and conservatism since World War II, changing how we think about the history of governance in modern United States history." – Jason Scott Smith, University of New Mexico

"Through elaborate archival inquiry and admirably broad research, Joanna Grisinger offers the authoritative account of the Administrative Procedures Act and its legacy. In a clear explanation of the mid-twentieth-century equipoise among administration, jurisprudence, and statute, The Unwieldy American State shows that bureaucratic administration co-evolves – sometimes smoothly and sometimes uneasily – with the modern rule of law and popular sovereignty." – Daniel Carpenter, Harvard University

Amazon provides the TOC and other introductory matter.
Posted by Dan Ernst at 12:30 AM