Out this month from Cambridge University Press is The Treason Trial of Aaron Burr: Law, Politics, and the Character Wars of the New Nation, by R. Kent Newmyer, University of Connecticut: 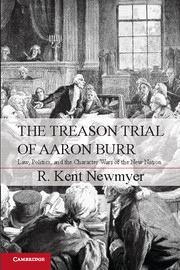 The Burr treason trial, one of the greatest criminal trials in American history, was significant for several reasons. The legal proceedings lasted seven months and featured some of the nation's best lawyers. It also pitted President Thomas Jefferson (who declared Burr guilty without the benefit of a trial and who masterminded the prosecution), Chief Justice John Marshall (who sat as a trial judge in the federal circuit court in Richmond), and former Vice President Aaron Burr (who was accused of planning to separate the western states from the Union) against each other. At issue, in addition to the life of Aaron Burr, were the rights of criminal defendants, the constitutional definition of treason, and the meaning of separation of powers in the Constitution. Capturing the sheer drama of the long trial, Kent Newmyer's book sheds new light on the chaotic process by which lawyers, judges, and politicians fashioned law for the new nation.

"Newmyer proves a worthy, wise guide to the Burr treason trial. This book has no heroes. Jefferson is manipulative. Burr is an arrogant anti-hero. Marshall slowly picks and cavils his way toward an independent federal judiciary. Gifted, flawed lawyers successfully defend one of the last men in America worth defending. The epilogue serves as a stunning summary of Newmyer's brilliant insights on the early republic." – Mary Sarah Bilder, Boston College Law School

"This lively narrative is the best short account of the Aaron Burr treason trial, one of the most colorful and dramatic episodes in the nation's history. Kent Newmyer brings a fresh perspective to the task, showing how a distinctively American law of treason emerged from the clash of outsized personalities gathered in Richmond in the summer of 1807. He is unexcelled in his mastery of the interplay of law and politics in the early republic." – Charles F. Hobson, William and Mary Law School

"Kent Newmyer has long been one of our leading constitutional historians, and this book displays his command of both the political and the technical aspects of early American public law. This book is a tremendous scholarly achievement, but that is not all: Newmyer has crafted a riveting story about the all-star cast of lawyers who took part in the trial and, of course, the three great antagonists, Jefferson, Marshall, and Burr himself. A masterpiece." – H. Jefferson Powell, Duke University School of Law

"The trial of Aaron Burr for treason in 1807 has been one of those episodes in American legal history to which many people refer and few understand. Kent Newmyer is exceptionally well qualified to unravel the complicated legal and political dimensions of the trial, and he has done so in erudite and accessible fashion." – G. Edward White, University of Virginia School of Law

"Kent Newmyer, one of the most distinguished legal historians in the country, has written an extraordinarily learned and balanced account of what is arguably the greatest criminal trial in American history. The trial seems as relevant today as it was in 1807." – Gordon S. Wood, Brown University
Posted by Dan Ernst at 12:30 AM