I note the publication of The Wadena Rock Festival: From Courtrooms to Cornfields, by Daniel P. Ernst, Constance R. Cherba, and Victor V. Sprengelmeyer.  The Daniel Ernst in question is my father, a lawyer who practiced primarily in Dubuque, Iowa. Constance Cherba is a talented writer; Victor Sprengelmeyer was my father’s law partner.  (None of them is related to the current Republican candidate for Iowa’s US Senate seat, so please don’t ask them or their offspring.)

In 1970, the year after Woodstock, promoters planned a rock festival near a small town in northwestern Illinois.  The ad copy continues:

The excitement began when the state of Illinois blocked a rock festival in Galena. The promoters crossed the Mississippi and scoured northeast Iowa for a suitable site, finally buying a farm near the tiny town of Wadena. Meanwhile, attorneys took up the cause in the courtrooms when Iowa tried to stop the festival. Tension built as some 40,000 members of the long-haired generation descended on the farm. Would the festival go on as scheduled? That became the million dollar question.

The book consists of (1) Sprengelmeyer’s account of how he came to represent the organizers and the hectic maneuvering to put on the concert; (2) a very readable narrative stitched together from the interviews of various participants; (3) illustrations; and (4) capsule descriptions of the bands that performed and some that didn’t.  Among the illustrations is the poster below right, designed for the original venue.  A copy of it graced my big sister’s bedroom door long after the event. 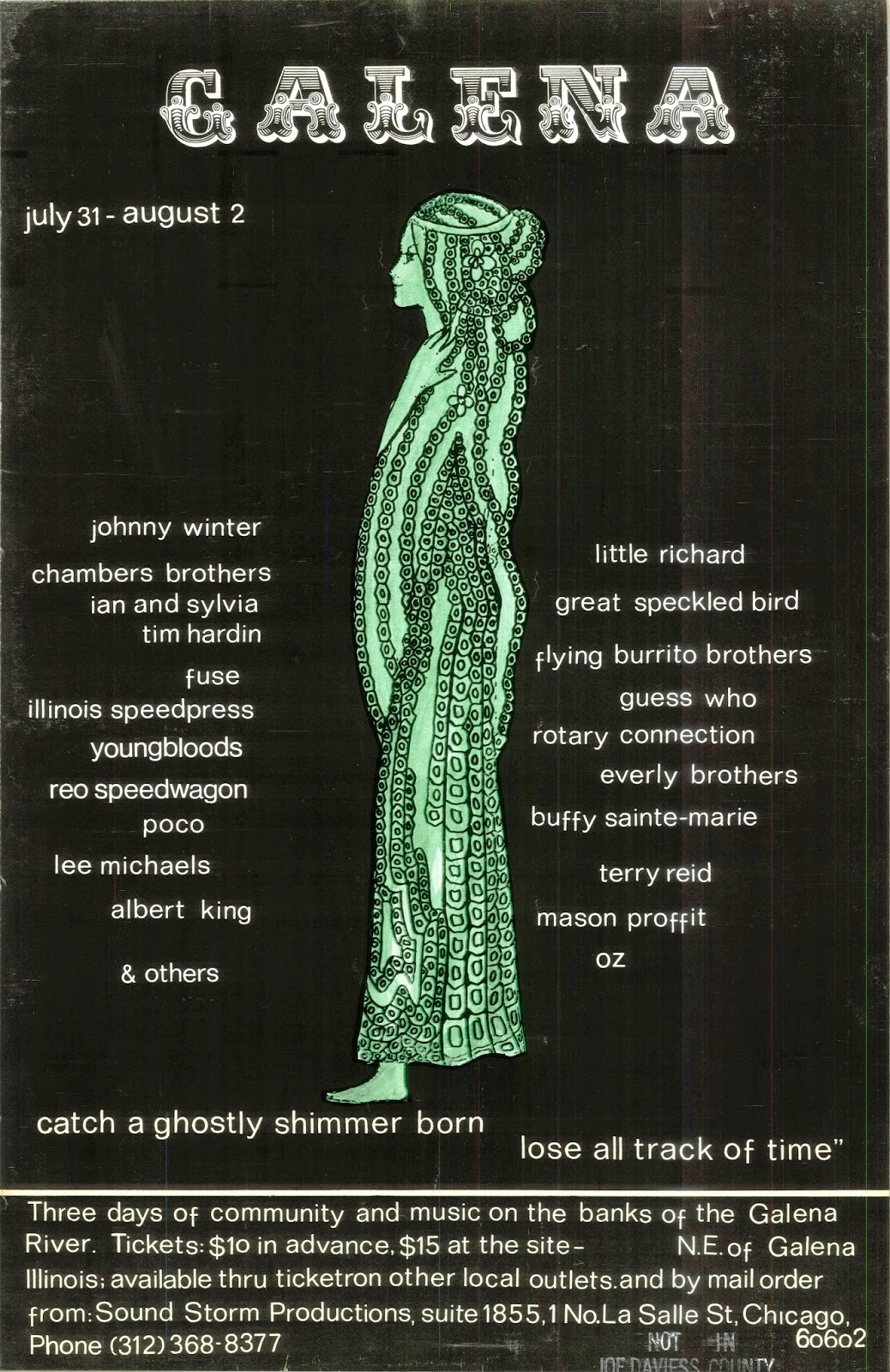 In keeping with the adage “If you can remember the Sixties, you weren’t there,” none of the interviewees has a very clear memory of the performances, which are not really described in the book.  The musicians’ recollections are particularly hazy, although Corky Siegel ventures that his band probably asked to go on early “so we could avoid the traffic.”  (I cannot really imagine myself as a rock musician, but if I could, I imagine I’d be one very much like Mr. Siegel.)

More vivid, for me at least, is the view of a small-town bar and its first encounter with the greening of America.  We hear, surely in an echo of war stories told at a favorite lunch spot, lawyers sizing each other up.  The state attorney general was a blusterer with more political aspirations than legal ability; Michael A. Stapleton, another of my father’s partners and a Georgetown law alumnus, was a quick-witted, pugnacious advocate, happy to “call bullshit” when the opportunity arose.  We also see the lawyers looking on in fascination as a younger generation effortlessly sloughed off social conventions their elders thought permanent.  I don’t recall that any of the lawyers “got greened.”  Even in the Seventies, Dubuque was no place for a William Kunstler.  What I do recall is a certain equanimity about social and cultural change.  After accurately predicting that western civilization would survive the gathering of thousands of drug-addled youths on a cornfield in northeastern Iowa, my father and his partners were inclined to take in stride whatever else a younger generation brought their way.
Posted by Dan Ernst at 12:30 AM