We were pleased to learn that the ABA Section on Administrative Law has awarded Nicholas R. Parrillo, Yale Law School, its Annual Scholarship Award for the year's best book or article on administrative law, namely Against the Profit Motive: The Salary Revolution in American Government, 1780-1940 (New Haven, CT: Yale University Press, 2013).  We quote from the citation: 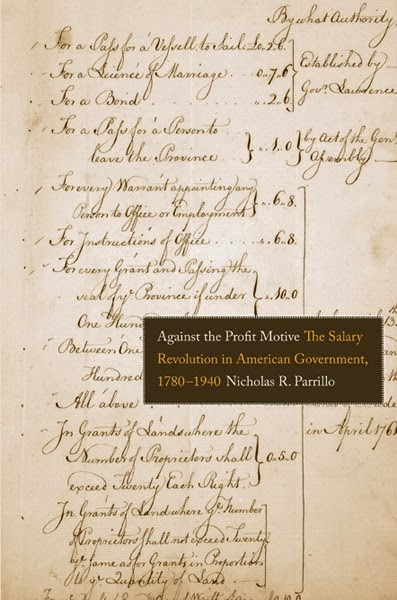 Professor Parrillo's book provides an important and comprehensive historical background on the use of commissions and fees to compensate persons executing core administrative functions (in both federal and state government agencies). The committee was tremendously impressed with the depth and scope of professor Parrillo's historical research into a topic of considerable importance. Plainly, the incentives we provide to those who staff administrative agencies will prefigure how - and whether -they exercise administrative discretion. A civil service working in the public interest is plainly more consistent with core democratic values of fair play, equal treatment, and due process than a system that relies on bounties and commissions to compensate civil servants.

Against the Profit Motive is well written, comprehensively researched, and provides important insights into once-common administrative practices and structures that have been wisely abandoned. At a time when local, state, and even the federal government are considering whether to privatize public functions, Professor Parrillo's book provides an important cautionary note on the potential risks associated with embracing the profit motive as an organizing principle in the administrative state. As he observes in the book, "the history suggests that you can recognize the value of nonprofit government even if you are indifferent or even hostile to bureaucracy-building more generally." (p. 361).

The committee believes that the lessons of history that Against the Profit Motive presents will be of considerable interest to legislators, lawyers, and legal academics alike -as well as to our many section members who work in federal, state, and local agencies. We are pleased to recognize Professor Parrillo's excellent book "against the profit motive" as the best work published in the field of administrative law in 2013.