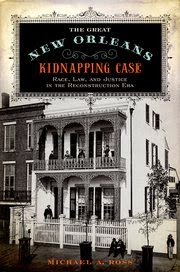 In June 1870, the residents of the city of New Orleans were already on edge when two African American women kidnapped seventeen-month-old Mollie Digby from in front of her New Orleans home. It was the height of Radical Reconstruction, and the old racial order had been turned upside down: black men now voted, held office, sat on juries, and served as policemen. Nervous white residents, certain that the end of slavery and resulting "Africanization" of the city would bring chaos, pointed to the Digby abduction as proof that no white child was safe. Louisiana's twenty-eight-year old Reconstruction governor, Henry Clay Warmoth, hoping to use the investigation of the kidnapping to validate his newly integrated police force to the highly suspicious white population of New Orleans, saw to it that the city's best Afro-Creole detective, John Baptiste Jourdain, was put on the case, and offered a huge reward for the return of Mollie Digby and the capture of her kidnappers. When the Associated Press sent the story out on the wire, newspaper readers around the country began to follow the New Orleans mystery. Eventually, police and prosecutors put two strikingly beautiful Afro-Creole women on trial for the crime, and interest in the case exploded as a tense courtroom drama unfolded.

In The Great New Orleans Kidnapping Case, Michael Ross offers the first full account of this event that electrified the South at one of the most critical moments in the history of American race relations. Tracing the crime from the moment it was committed through the highly publicized investigation and sensationalized trial that followed, all the while chronicling the public outcry and escalating hysteria as news and rumors surrounding the crime spread, Ross paints a vivid picture of the Reconstruction-era South and the complexities and possibilities that faced the newly integrated society. Leading readers into smoke-filled concert saloons, Garden District drawing rooms, sweltering courthouses, and squalid prisons, Ross brings this fascinating era back to life.

A stunning work of historical recreation, The Great New Orleans Kidnapping Case is sure to captivate anyone interested in legal history, the Civil War and its aftermath, and the history of New Orleans and the American South.

"Advanced Praise and Early Reviews" by the likes of Laura Edwards, Kevin Boyle and Dan T. Carter after the jump.
"The Great New Orleans Kidnapping Case is such a great read that it is easy to forget that the book is a work of history, not fiction. Who kidnapped Mollie Digby? The book, however, is compelling because it is great history. As Ross explores the mystery of Digby's disappearance, he reconstructs the lives not just of the Irish immigrant parents of Mollie Digby and the women of color accused of her kidnapping, but also the broad range of New Orleanians who became involved in the case. The kidnapping thus serves as a lens on the possibilities and uncertainties of Reconstruction, which take on new meanings because of Ross's skillful research and masterful storytelling." --Laura F. Edwards, Duke University

"Michael Ross' The Great New Orleans Kidnapping Case has all the elements one might expect from a legal thriller set in nineteenth-century New Orleans. Child abduction and voodoo. 'Quadroons.' A national headline-grabbing trial. Plus an intrepid creole detective.... A terrific job of sleuthing and storytelling, right through to the stunning epilogue." --Lawrence N. Powell, author of The Accidental City: Improvising New Orleans

"When little Mollie Digby went missing from her New Orleans home in the summer of 1870, her disappearance became a national sensation. In his compelling new book Michael Ross brings Mollie back. Read The Great New Orleans Kidnapping Case for the extraordinary story it tells--and the complex world it reveals." --Kevin Boyle, author of Arc of Justice: A Saga of Race, Civil Rights, and Murder in the Jazz Age

"Michael Ross's account of the 1870 New Orleans kidnapping of a white baby by two African-American women is a gripping narrative of one of the most sensational trials of the post-Civil War South. Even as he draws his readers into an engrossing mystery and detective story, Ross skillfully illuminates some of the most fundamental conflicts of race and class in New Orleans and the region." --Dan T. Carter, University of South Carolina

"The Great New Orleans Kidnapping Case is a masterwork of narration, with twists, turns, cliff-hangers, and an impeccable level of telling detail about a fascinating cast of characters. The reader comes away from this immersive experience with a deeper and sadder understanding of the possibilities and limits of Reconstruction." --Stephen Berry, author of House of Abraham: Lincoln and The Todds, a Family Divided by War

"Ross adds mystery and intrigue to the historic Reconstruction era in New Orleans through his retelling of a sensational true crime tale... Impeccable research and crisp, compelling writing bring us to the case's resolution." --Library Journal

"Ross slowly reconstructs the case and describes the trial, allowing the mystery of guilt or innocence to crescendo. He also demonstrates how a kidnapping case featuring a disbelieving immigrant father, exotic race and legal systems, and a crime-ridden city known for debauchery captivated national attention. Ross poses relevant questions that show this nearly forgotten case's significance to American history." --Publishers Weekly
Posted by Dan Ernst at 9:30 AM