Out from Cambridge University Press next month, but available for pre-order now, is Freedom and Criminal Responsibility in American Legal Thought, by Thomas Andrew Green, the John P. Dawson Collegiate Professor of Law emeritus and Professor of History emeritus at the University of Michigan. 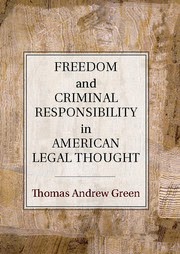 As the first full-length study of twentieth-century American legal academics wrestling with the problem of free will versus determinism in the context of criminal responsibility, this book deals with one of the most fundamental problems in criminal law. Thomas Andrew Green chronicles legal academic ideas from the Progressive Era critiques of free will-based (and generally retributive) theories of criminal responsibility to the midcentury acceptance of the idea of free will as necessary to a criminal law conceived of in practical moral-legal terms that need not accord with scientific fact to the late-in-century insistence on the compatibility of scientific determinism with moral and legal responsibility and with a modern version of the retributivism that the Progressives had attacked. Foregrounding scholars’ language and ideas, Green invites readers to participate in reconstructing an aspect of the past that is central to attempts to work out bases for moral judgment, legal blame, and criminal punishment.


Thomas Green's Freedom and Criminal Responsibility in American Legal Thought delivers what its title promises, namely, over a hundred years of history of the debate among American legal academics and philosophers over the implications for criminal responsibility of the free will/determinism issue. Green comprehensively and critically surveys the views of all of the major and not-so-major contributors to this debate, from Roscoe Pound to Michael Moore and beyond. A tour de force.

Contents after the jump.
Introduction
Part I. Freedom and Criminal Responsibility in the Age of Pound:
1. The fin de siècle: Speranza
2. The Progressive Era: Pound
3. Pound eclipsed?: the conversation of the mid to late 1920s
Part II. Conventional Morality and the Rule of Law: Freedom and Criminal Responsibility in the Forgotten Years, 1930–60:
4. Scientific positivism, utilitarianism, and the wages of conventional morality, 1930–7
5. Entr'acte: intimations of freedom, 1937–53
6. Durham v. US, the moral context of the law, and reinterpretations of the Progressive inheritance, 1954–8
Part III. Freedom, Criminal Responsibility, and Retributivism in Late Twentieth-Century Legal Thought:
7. The foundations of neo-retributivism, 1957–76
8. Rethinking the freedom question, 1978–94
9. Competing perspectives at the close of the twentieth century
Conclusion.
Posted by Dan Ernst at 12:30 AM