Murnane's "Bankruptcy in an Industrial Society"

Out from the University of Akron Press, at a price even a debtor can afford, is Bankruptcy in an Industrial Society: A History of the Bankruptcy Court for the Northern District of Ohio, by M. Susan Murnane, whose degrees include a Ph.D. from Case Western Reserve University. The press rather tamely describes the book as

But as you can see from the blurbs, Bruce Mann and I think Bankruptcy in an Industrial Society is a lot more interesting than that. 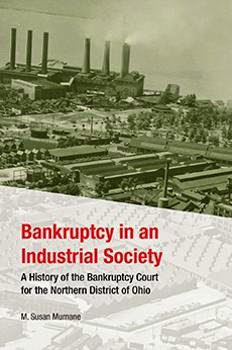 M. Susan Murnane has written more than a history of a legal institution: her book is, as well, an institutional history of bankruptcy in United States. In full command of regional context and national trends, Murnane shows how, after Congress failed to anticipate the new forms of business risk and consumer debt of the twentieth-century economy, lawyers and judges did the job themselves by organizing professional associations, battling influence and corruption, and keeping national administrators of the federal courts responsive to the special needs of creditors and debtors. Readers will encounter rich detail, drawn from personal papers and government archives, concise statements of economic change, and clear explanations of the law and practice of bankruptcy. By revealing how much legal institutions mattered to industrialization and deindustrialization in northern Ohio, Murnane has written a model history of a court and a uniquely valuable account of a vital legal pillar of American capitalism.
—Daniel R. Ernst, author of Tocqueville’s Nightmare: The Administrative State Emerges in America, 1900–1940

Bankruptcy in an Industrial Society is more than the first comprehensive institutional history of one bankruptcy court. It is also a story of the rise and eventual decline of an industrial economy, told from the vantage point of a court that exists solely to sort through the failures that are the inevitable by-products of capitalist enterprise. Murnane combines the two skillfully and with great insight. Lawyers and historians everywhere—and not just in the northern district of Ohio—will be in her debt.
—Bruce H. Mann, author of Republic of Debtors: Bankruptcy in the Age of American Independence