We're pleased to learn that the University of North Carolina Press is bringing out a paperback edition of Working Knowledge: Employee Innovation and the Rise of Corporate Intellectual Property, 1800-1930, by Catherine L. Fisk, University of California Irvine Law.  The book, which appeared in "Studies in Legal History" (the American Society for Legal History’s book series), won both the Littleton-Griswold Prize of the American Historical Association and the ASLH’s John Phillip Reid Book Award in 2010: 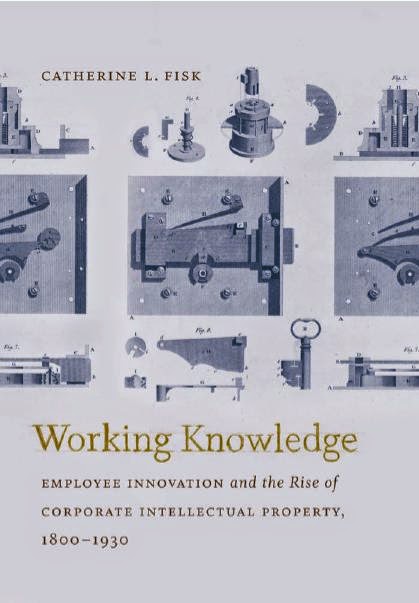 Skilled workers of the early nineteenth century enjoyed a degree of professional independence because workplace knowledge and technical skill were their "property," or at least their attribute. In most sectors of today's economy, however, it is a foundational and widely accepted truth that businesses retain legal ownership of employee-generated intellectual property.

In Working Knowledge, Catherine Fisk chronicles the legal and social transformations that led to the transfer of ownership of employee innovation from labor to management. This deeply contested development was won at the expense of workers' entrepreneurial independence and ultimately, Fisk argues, economic democracy.

By reviewing judicial decisions and legal scholarship on all aspects of employee-generated intellectual property and combing the archives of major nineteenth-century intellectual property-producing companies--including DuPont, Rand McNally, and the American Tobacco Company--Fisk makes a highly technical area of law accessible to general readers while also addressing scholarly deficiencies in the histories of labor, intellectual property, and the business of technology.