New from the University of Nebraska Press: Blood Will Tell: Native Americans and Assimilation Policy (August 2017), by Katherine Ellinghaus (University of Melbourne). A description from the Press: 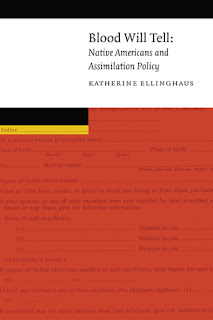 Blood Will Tell reveals the underlying centrality of “blood” that shaped official ideas
about who was eligible to be defined as Indian by the General Allotment Act in the United States. Katherine Ellinghaus traces the idea of blood quantum and how the concept came to dominate Native identity and national status between 1887 and 1934 and how related exclusionary policies functioned to dispossess Native people of their land. The U.S. government’s unspoken assumption at the time was that Natives of mixed descent were undeserving of tribal status and benefits, notwithstanding that Native Americans of mixed descent played crucial roles in the national implementation of allotment policy.

Ellinghaus explores on-the-ground case studies of Anishinaabeg, Arapahos, Cherokees, Eastern Cherokees, Cheyennes, Chickasaws, Choctaws, Creeks, Lakotas, Lumbees, Ojibwes, Seminoles, and Virginia tribes. Documented in these cases, the history of blood quantum as a policy reveals assimilation’s implications and legacy. The role of blood quantum is integral to understanding how Native Americans came to be one of the most disadvantaged groups in the United States, and it remains a significant part of present-day debates about Indian identity and tribal membership. Blood Will Tell is an important and timely contribution to current political and scholarly debates.


“Katherine Ellinghaus brilliantly traces the uneven practices that produced a powerful discourse of American Indian blood quantum. With sure hand and subtle interpretation, Blood Will Tell offers a compelling new reading of a technology of identity at once complicated and crude.”—Philip J. Deloria