Milewski's "Litigating Across the Color Line"

Melissa Milewski, a Lecturer in American History at the University of Sussex, has published Litigating Across the Color Line: Civil Cases Between Black and White Southerners from the End of Slavery to Civil Rights, with the Oxford University Press.  Professor Milewski will guest blog on her book next month. 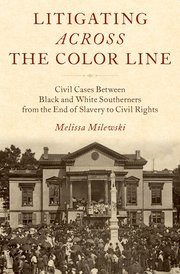 As a result of the violence, segregation and disfranchisement that occurred throughout the South in the decades after Reconstruction, it has generally been assumed that African Americans in the post-Reconstruction South litigated few civil cases and faced widespread inequality in the suits they did pursue. In this groundbreaking work, Melissa Milewski shows that black men and women were far more able to negotiate the southern legal system during the era of Jim Crow than previously realized. She explores how, when the financial futures of their families were on the line, black litigants throughout the South took on white southerners in civil suits and at times succeeded in finding justice in Southern courts. Between 1865 and 1950, in almost a thousand civil cases across eight southern states, former slaves took their former masters to court, black sharecroppers litigated against white landowners, and African Americans with little formal education brought disputes against wealthy white members of their communities.

As black southerners negotiated a legal system with almost all white gate-keepers, they found that certain kinds of civil cases were much easier to gain whites' support for than others. But in the suits they were able to litigate, they displayed pragmatism and a savvy understanding of how to get whites on their side. Their negotiation of this system proved surprisingly successful: in the civil cases African Americans litigated in the highest courts of eight states, they won more than half of their suits against whites throughout the period from 1865 to 1950.

Litigating Across the Color Line shows that in a tremendously constrained environment where they were often shut out of other government institutions, seen as racially inferior, and often segregated, African Americans found a way to fight for their rights in one of the only ways they could. Through these suits, African Americans adapted and at times made a biased system work for them. At the same time, Milewski considers the limitations of working within a white-dominated system at a time of great racial discrimination -- and the choices black litigants had to make to get their cases heard.


“Shining new light on race, rights, and justice, Melissa Milewski shows how ex-slaves found a measure of power by going to court in the Jim Crow South.  This is a vivid and arresting account of legal conflict over property, contracts, fraud, and personal injury, and of challenges waged against white supremacy, disenfranchisement, and mob violence.”—Amy Dru Stanley, University of Chicago

“In this thoroughly researched, deeply nuanced, strongly revisionist example of the new cultural history of law, Melissa Milewski unearths the fascinating human stories of nearly a thousand civil lawsuits between blacks and whites in eight southern states from 1865 to 1950.  Many readers will be surprised to learn that African-Americans won a majority of the cases, that black women were parties in 41% of them, and that African-Americans quickly learned to manipulate white supremacist beliefs to their advantage in the courts.  Beautifully written, Milewski’s book will be a landmark not only in legal history, but also in the history of the South and of race relations.”—J. Morgan Kousser, author of Colorblind Injustice

“Working from a database of ordinary civil cases in which African Americans were involved in the post-Reconstruction South, and enhanced by her exploration of the social and economic background of several of those cases, Melissa Milewski opens up new lines of thinking about how the law in a racist, grossly unequal society can both reproduce the society's power relations and deliver justice to the subordinated groups.”—Mark Tushnet, Harvard Law School

“In this engrossing and meticulous assessment of civil cases in local and state courts, Melissa Milewski builds on considerable research to discern African Americans’ legal strategies for protecting their hard-earned rights and navigating the judicial landscape of the New South. She reveals the complexity of the region’s legal culture and challenges notions that African Americans enjoyed no power within it by detailing their shrewd maneuvers to advance their cases through a system that, while uncompromising about protecting the larger white power structure, exercised more flexibility regarding individual cases surrounding such issues as labor, property, and physical damages. Readers will not be able to look at African Americans’ participation in southern legal culture in the same way after absorbing Litigating Across the Color Line.”—Kidada E. Williams, author of They Left Great Marks on Me: African American Testimonies about Racial Violence from Emancipation to World War I