Jon O. Newman, a senior judge of the U.S. Court of Appeals for the Second Circuit, recently published his memoir, Benched: Abortion, Terrorists, Drones, Crooks, Supreme Court, Kennedy, Nixon, Demi Moore, and Other Tales from the Life of a Federal Judge, with William S. Hein & Co.: 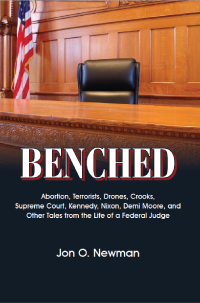 It is an explanation of what judges really do, a proposal for a better justice system, and a firsthand account of several important cases dealing with topics ranging from terrorism to movie stars. In this title, Newman aims to dispel the popular notion that judges vote based on personal preference. He outlines twenty proposals for improvements in the American system of Justice, covering such diverse topics as police misconduct laws, selection of juries, citizen standing to sue government officials, reviving the independent counsel, and death penalty sentencing.

The life of a judge can be remarkable. Judges deal with an extraordinarily wide variety of disputes, all of which matter greatly to the people involved and some of which are at the center of vital legal issues. In his career, Newman has encountered presidents, senators, governors, and hundreds of judges from here and abroad, an array of personalities in and out of court, the famous and the infamous and the impressive and the bizarre. He has had fortuitous opportunities that have enabled him to see the inner workings of the White House, Congress, and the Supreme Court and has served as a United States Attorney, a federal trial judge, and a federal appellate judge. Newman’s experiences, insights, and proposals discussed in this book will be of great interest to legal professional and nonlawyers alike.