Something tells me that this book will be disturbingly popular.
HOW TO TALK ABOUT BOOKS YOU HAVEN’T READ by Pierre Bayard, translated by Jeffrey Mehlman (Bloomsbury), is reviewed today in the New York Times by Jay McInerney. McInerney writes, in part:
For Bayard, who is well served by Jeffrey Mehlman’s fluid and elegant translation, 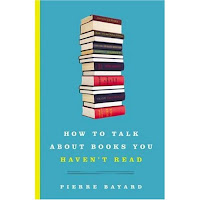 skimming and sampling are two of the most common forms of reading behavior, particularly with regard to Proust. Paul Valéry, in his funerary tribute in La Nouvelle Revue Française, makes a virtue out of his admittedly sketchy knowledge of Proust by claiming: “The interest of the book lies in each fragment. We can open the book wherever we choose.” Bayard defends skimming as a mode of reading. “The fertility of this mode of discovery markedly unsettles the difference between reading and nonreading, or even the idea of reading at all. ... It appears that most often, at least for the books that are central to our particular culture, our behavior inhabits some intermediate territory, to the point that it becomes difficult to judge whether we have read them or not.”...

Bayard proposes the term “inner book” to designate “the set of mythic representations, be they collective or individual, that come between the reader and any new piece of writing, shaping his reading without his realizing it.” This notion coincides with Stanley Fish’s concept of “interpretive communities” of readers, although Bayard’s own inner book may be more indebted to home-team text destabilizers like Derrida and Lacan. Indeed, Bayard sounds more French in the later pages as he employs phrases like “consensual space” and dissolves the boundaries and false oppositions between reader and writer and book into one big sloppy pool of écriture.

To what end? Bayard finally reveals his diabolical intent: he claims that talking about books you haven’t read is “an authentic creative activity.” As a teacher of literature, he seems to believe that his ultimate goal is to encourage creativity. “All education,” he writes, “should strive to help those receiving it to gain enough freedom in relation to works of art to themselves become writers and artists. You can get started by not reading the first chapter right here.
Posted by Mary L. Dudziak at 9:47 AM