Reviewed: Rediker, The Slave Ship, and Blight, A Slave No More

The Slave Ship: A Human History by Marcus Rediker (Viking) and A Slave No More: Two Men Who Escaped to Freedom, Including Their Own Narratives of Emancipation by David W. Blight (Harcourt) are reviewed in the Boston Globe by James Smethurst, W.E.B. Du Bois Department of Afro-American Studies, University of Massachusetts at Amherst. He writes: 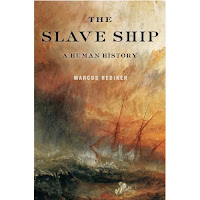 ears historians in the United States, even scholars who challenged the relatively benign view of slavery and harsh view of Reconstruction that dominated the academy until at least the 1950s, were reluctant to draw on the testimony of the slaves themselves as found in their personal narratives....More recently, such firsthand stories have been increasingly employed to put a face on slavery and give a more vivid sense of the human dimension of that crucial, and horrifying, epoch of US history. Two new books...are both powerful additions to this body of scholarship.

Rediker's book closely examines the slave ship era, especially that of Britain and the United States in the 18th and early 19th centuries....Rediker convincingly argues that the slave ship in many respects set the character of slavery as well as the cultures of the masters and the slaves in the New World....Rediker shows how the slave ship was a capitalist venture, a site of class warfare, a prison, and an unintended instrument of ethnogenesis through which many African peoples speaking scores of languages began to forge common pan-African identities even before their debarkation in the Western Hemisphere. He also delineates some of the processes and the arbitrary peculiarities of race formation in a system that marked slaves as "black" a

nd sailors as "white" - even though some of the sailors were Africans and many not "white" as the term would come to be understood in the United States....

The occasion for Blight's book was the discovery of narratives written after the Civil War by two former slaves, Wallace Turnage and John Washington, which are presented in relatively unedited form after several chapters contextualizing the stories of the two men....As Blight points out, these autobiographies give a different look into the minds and memories of former slaves than do many better-known narratives aimed at a larger, and largely white, audience, generally with the mediation of a white editor....Turnage and Washington amply demonstrate the vindictive cruelty of many masters and the more impersonal inhumanity embodied in the separation of family members as part of a "rational" economic decision. Even more, their accounts illuminate the variety of resistance to the slave regime....Framing these narratives are Blight's preceding chapters, which lay out what he and his fellow researchers were able to discover about the lives of Turnage and Washington....Thus, the two narratives give insight not only into the slave era, but also into the psychology of the black working class as it faced the collapse of Reconstruction.
The rest is here.
Posted by Mary L. Dudziak at 9:26 AM