Littleton-Griswold Prize to Tsuk Mitchell and other AHA prizes 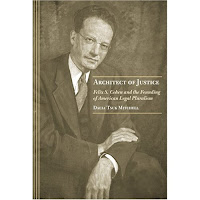 Littleton-Griswold Prize for the best book in American law and society will be awarded to Dalia Tsuk Mitchell for Architect of Justice: Felix S. Cohen and the Founding of American Legal Pluralism (Cornell Univ. Press, 2006) at the annual meeting of the American Historical Association in January.