Gerteis reviews Hamilton, The Limits of Sovereignty: Property Confiscation in the Union and Confederacy during the Civil War

Daniel W. Hamilton, The Limits of Sovereignty: Property Confiscation in the Union and the Confederacy during the Civil War (University of Chicago Press, 2007) is reviewed for H-CivWar by Louis S. Gerteis, Department of History, University of Missouri-St. Louis. Gerteis writes, in part: 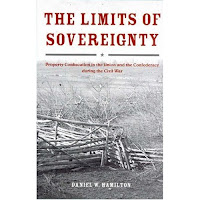 On the topic of wartime confiscation Abraham Lincoln insisted that the Constitution governed the issue for Congress. The Constitution gave Congress full authority to determine the punishment for treason, but Article III, section 3 stipulated that "no Attainder of Treason shall work Corruption of Blood, or Forfeiture except during the Life of the Person attained." In this insightful and illuminating new study, Daniel Hamilton acknowledges that Lincoln succeeded in linking the issue of confiscation to treason and imposing the life estate limit on confiscation. But Hamilton locates his study within a wider analysis of the development of property rights theory. Hamilton begins with an examination of the widespread confiscation of Tory property carried out by states during the American Revolution. Here he identifies a republican view of property rights linked to loyalty to a sovereign power. This community based sense of property rights held that disloyalty to a sovereign power caused property rights to be extinguished.

As Hamilton demonstrates, some Republicans invoked this older view of property rights when they argued in favor of widespread confiscation and land redistribution during the Civil War. Former slaves similarly hoped that their loyalty to the Union might bring them "Forty Acres and a Mule" in freedom. It is the central thesis of Hamilton's work that widespread confiscation failed during the Civil War because a newer doctrine of individual property rights overcame the older association of property rights with loyalty to a sovereign. During the first half of the nineteenth century, writes Hamilton, "an individualized, rights-oriented conception of property gained increasing dominance in American law and in constitutional interpretation." In the postwar years, the Supreme Court, often led by Justice Stephen Field, reinforced the liberal theory of property rights and thoroughly rejected the older "conception of property ultimately held at the sufferance of the sovereign" (p. 9)....
Legislative confiscation is the central focus of Hamilton's work. The widespread use of confiscation by state legislatures during the American Revolution to seize the property of disloyal persons expressed a republican view of property rights that linked them to community stability and wellbeing. Federalists responded to what they viewed as an excess of republican zeal in this regard by drafting a Constitution that prohibited state and federal bills of attainder. Furthermore, the Fifth Amendment linked confiscation to judicial processes and significantly curtailed the Revolutionary era tradition. In the early decades of the nineteenth century, Chief Justice John Marshall built on these constitutional foundations to advance the doctrine of vested rights in property. "At the heart of the vested rights doctrine," writes Hamilton, "was the notion that the lines between legislative and judicial authority over property must be tightly drawn" (p. 46). Marshall's rigid interpretation of the Constitution's "obligations of contracts" clause drew precisely that distinction. The vested rights doctrine steadily gained authority in the first half of the nineteenth century and, during the Civil War debates over confiscation, most Republicans (with Lincoln at the forefront) embraced the"strict sanctity of private property" (p. 47). Nevertheless, a minority of Republicans held fast to elements of the older ideology.

A leading voice in this minority was Illinois Senator Lyman Trumbull. We are reminded by Michael Vorenberg's recent work on the Thirteenth Amendment and again in Hamilton's study that Trumbull deserves closer scholarly attention. Trumbull led the effort to secure broad legislative confiscation during the Civil War and doggedly resisted Lincoln's efforts to restrict confiscation by tying it to individual treason trials and limit its reach to life estates....
Trumbull's plan failed. Most Republicans embraced the vested rights doctrine and shrank from legislative confiscation. Historians have noted for many years that central government powers expanded significantly after the Civil War. But, in this area, as Hamilton notes, congress imposed new limits on its powers. What emerged as the Second Confiscation Act followed Lincoln's view that confiscation must be linked to treason trials and limited to life estates. The only sweeping passage of the Second Confiscation Act was its provision for the immediate liberation of slaves of disloyal masters....The doctrine of vested property rights overwhelmed Trumbull's confiscation efforts and it continued to gain strength in the post war Supreme Court.
Historians of Reconstruction have long noted that Radical Republicans forged a postwar consensus supporting equal rights and universal male suffrage at the same time that they debated but never embraced a plan for land confiscation and redistribution in the defeated South. Discussions of land reform died out as Republicans retreated from Reconstruction and as southern white Redeemers, emboldened by Andrew Johnson's leniency, seized control of southern states. Hamilton suggests that this familiar Reconstruction narrative is misleading. Republicans came to power in 1861 not simply to vanquish the Slave Power but to advance a liberal legal agenda that placed the uncompensated confiscation of private property beyond the reach of legislatures.
The rest is here.
Posted by Mary L. Dudziak at 8:44 AM