He Likes Ike: Nichols, A Matter of Justice: Eisenhower and the Beginning of the Civil Rights Revolution

A Matter of Justice: Eisenhower and the Beginning of the Civil Rights Revolution by David A. Nichols (Simon & Schuster) is reviewed in the Boston Globe by James A. Miller, George Washington University.

I was put off by this book, which begins with the author's suggestion that other sc 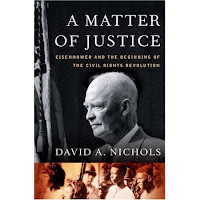 holars critical of Eisenhower's civil rights record have relied on his public statements, rather than archival records. This does not comport with what I saw in Abilene, Kansas, at the Eisenhower Library, where scholars were not reading President Eisenhower's speeches, but pouring through the library's extensive archival holdings. As Miller suggests, Nichols' claim "seems to dismiss the considerable research and ink devoted to Eisenhower's record on civil rights, particularly over the past two decades." Perhaps it would have been better to simply note that the book draws upon the recently released papers of Eisenhower's chief White House aide on civil rights, Maxwell Rabb.

Nichols also seems to bend over backward to explain away some sources, such as Eisenhower's halting answers to media questions immediately after the Supreme Court's Brown decision, finding Eisenhower's later statements in his published memoir to be more convincing about the president's views about Brown than his contemporaneous statements. This is methodologically questionable, and makes it appear as if Nichols is picking and choosing among sources to support his thesis that Eisenhower's civil rights record is stronger than others have given him credit for. (This is my take, rather than Miller's).

But Miller finds contributions in spite of the book's limitations. As he points out,

Nichols's explanations for Eisenhower's rhetorical gaffes and stumbles about civil rights are not always persuasive, but he makes a strong case for Eisenhower's legislative achievements, within the givens of his historical and political circumstances - particularly when his record is held up against that of his successor, John F. Kennedy. These insights alone are likely to provoke precisely the reconsideration that Nichols hopes for.

Although Eisenhower was a "nineteenth-century man, raised in an era of blatant white supremacy in American life," Nichols maintains that he brought to his presidency in 1953 a deep commitment to egalitarian values, nurtured by his heartland upbringing, and an abiding belief in the law of the land, as interpreted by the Supreme Court. It was Eisenhower who implemented Truman's Executive Order 9981, requiring equal opportunity for African-Americans in the US military, thereby achieving "in less than two years what President Truman had failed to accomplish in seven" - even though Truman is routinely credited for this achievement in American history textbooks. Most important, Nichols insists, to understand Eisenhower's legacy, you must pay close attention to the staffing appointments that made his achievements in civil rights possible, including the appointment of five justices to the Supreme Court, none of them Southerners, none of them segregationists - an enviable record by contemporary standards.

While Eisenhower's achievements in civil rights are certainly noteworthy, they have been overshadowed by the public pronouncement that would come to haunt Eisenhower long after the historic 1954 Supreme Court decision, Brown v. Board of Educatio

n, outlawing segregation in America's public schools: "The Supreme Court has spoken and I am sworn to uphold the constitutional processes in this country; and I will obey." Nichols blames the cold and detached formality of this statement on Eisenhower's "disdain for symbolic acts" and his preference for "action rather than public pronouncement," even as he acknowledges that "Eisenhower's aloof strategy collided with a growing public obsession with presidential rhetoric, especially on the question of race."

Most of all, however, Nichols sees the chief culprit behind Eisenhower's damaged public image - then and now - as Chief Justice Earl Warren. "No subsequent president has made a judicial appointment of greater consequence for civil rights," Nichols writes, but Warren also emerged as Eisenhower's political nemesis whose "iconic position . . . enabled him to largely define how Dwight Eisenhower's leadership on civil rights would be viewed by scholars and the media."

This point is particularly interesting, since Warren blamed Eisenhower for the rise of massive resistance to Brown, faulting his lack of public support for the decision and lack of leadership on the issue. New scholarship on the relationship between Warren and Eisenhower, in light of Nichols' assessment, would be most welcome.

Nichols traces the trajectory of events that led to the passage of the Civil Rights Act of 1957, legislation for which, he argues, historians have given the then Senate majority leader, Lyndon B. Johnson, much more credit than he deserved. These events, however, are preliminary to arguably the most dramatic episode of Eisenhower's domestic policies: his decision to send federal troops into the South in support of federal policies for the first time since Reconstruction. This was indeed a watershed moment, and Nichols provides a fascinating account of the behind-the-scenes discussions and maneuvers, before and after the event.

The full review is here.
The photo is Chief Justice Warren and President Eisenhower as Eisenhower takes the oath of office, 1957.
Posted by Mary L. Dudziak at 10:53 AM