Graber reviews Frymer, Black and Blue: African Americans, the Labor Movement, and the Decline of the Democratic Party

Mark Graber discusses Paul Frymer's new book, Black and Blue: African Americans, the Labor Movement, and the Decline of the Democratic Party (Princeton University Press) at Balkinization. According to Graber, Black and Blue
is an exceptional study of the relationships between the civil rights and la 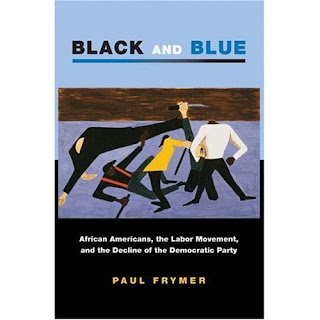 bor movements during the second half of the twentieth century. Professor Frymer of the University of California, Santa Cruz, challenges both the common view in political science that courts cannot bring about social change, and the common view in law that courts are desirable agents for social change. The result is a far more nuanced understanding of the role of courts in American political and constitutional development. Judicial decisions matter, but they matter for reasons that confound scholars and policy activists. The book also tackles important problems in the politics of race. Race matters Professor Frymer concludes (not exactly a surprise so far), but race matters as a political phenomenon intertwined with constitutional institutions, and not simply as bad thoughts. Some institutions are structured in ways that privilege racism, others in ways that promote liberal equality. The American labor regime, alas, too often had the former characteristics.
Professor Frymer’s story begins with African-Americans seeking entry to labor unions. Entry is desirable because in the early to mid-New Deal Order, labor unions promised members both economic security and political power. Entry was also problematic because whereas previous labor struggles had pitted liberals against conservatives, efforts to integrate labor unions pit racial liberals against economic liberals. The challenge was how to achieve the goals of both so that each would remain a pillar of liberal political power. This challenge was not successfully hurdled. Black and Blue highlights how labor and civil rights had, in effect, established separate governing regimes during the 1930s and 1960s. The result was that when civil rights decisions were made consistent with the regime set up by the Civil Rights Act of 1964, those rulings frequently weakened the labor friendly regime set up by the Wagner Act of 1936.
Litigating civil rights had far more ambiguous results than inherited wisdom proclaims, whether that wisdom celebrates or bashes courts. On the one hand, Frymer documents a liberal success story. Contrary to Gerald Rosenberg and others, courts were able to produce substantial integration. For reasons often unrelated to civil rights struggles, trial lawyers and judges during the middle of the twentieth century facilitated lawsuits as a means of vindicating legal wrongs. Courts could not reshape institutions on their own, but they could order large damages (notice the important riff on the autonomy of law here). These large damages attracted lawyers to civil rights causes and threatened to bankrupt racist unions. The result was a good deal of litigation, a good deal of success, and a good deal more integration as a result of that success than existing models claimed was possible. Controversial judicial decisions do get implemented when, for various reasons, judicial losers cannot rally sufficient political support and those decisions impose substantial financial burdens on the losers. Nevertheless, these victories came with unanticipated costs. The immediate problem with going through the courts was that judicial winner-take all decrees increased antagonisms between two vital democratic constituencies, thus weakening the power of liberals to make policy in general. Faced with liberal politicians unwilling to take clear sides between African-Americans and labor, many union members turned to more conservative politicians. Second, labor unions could be integrated only by means that weakened the economic and political capacity of unions. Thus, while unions are presently integrated and some are now almost completely non-white, unions no longer exercise the power than made them politically attractive to liberals during the late 1960s. Judicial decisions weakened seniority systems and independent labor government. Significantly, Frymer points out, much civil rights litigation on these matters was financed by corporate lawyers and law firms, who had little interest in unionization. In short, courts were able to facilitate black entry into labor unions only by weakening labor unions as a vehicle for black economic and political power.
There is substantial grist in this mill for students of American constitutionalism, American politics, and American political development. Professor Frymer is particularly effective when demonstrating how institutional strategies Democrats employed to consolidated power during the New Deal created a political clash that destroyed liberal power during the Great Society. The Roosevelt coalition moved along two institutional paths. On the one hand, that coalition sought to take labor policy away from hostile courts and vest authority in more friendly legislatures and administrative agencies. On the other hand, prominent New Dealers sought to take race policy away from conservative southern Democrats in Congress and vest that policy in the more liberal justices staffing the federal judiciary, particular the northern circuits. Much has been written on how the latter policy increased tensions between the northern and southern wings of the Democratic Party during the 1940s and 1950s, eventually resulting in the destruction of the solid South in 1964. What Frymer demonstrates is that the same institutional choices had a similarly destructive outcome in the north, as racial liberals who identified with courts did battle with economic liberals who identified with elected officials. His study of the particular details of this struggle, as well as the institutional circumstances that guided the struggle will be discussed for years to come.
Posted by Mary L. Dudziak at 5:50 PM