Weinberg reviews Symeonides in Theory Wars in the Conflict of Laws

Louise Weinberg, University of Texas, has posted a review essay, Theory Wars in the Conflict of Laws. She discusses THE AMERICAN CHOICE-OF-LAW REVOLUTION IN THE COURTS: TODAY AND TOMORROW by Symeon C. Symeonides (Martinus Nuhoff Publishers). The essay appeared in the Michigan Law Review. Here's the abstract:
This article reviews a brilliant new book of legal theory concerned with the probl 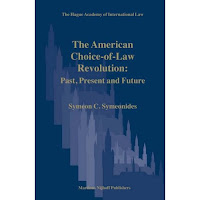 em of conflicting laws. The reviewer takes the occasion to trace the intellectual history of the mid-20th century modernist-realist revolution in American legal thought as it occurred in the field of the conflict of laws, when writers like Walter Wheeler Cook were using the example of the conflict of laws to make the legal-realist case. The article then clarifies the nature and power of the interest analytic legal theory that thereafter emerged in that field to supplant for a time the then-prevailing simplistic territorialist choice-of-law method, and permanently changed the terms of the debate. Using modernist interest analysis, the reviewer comes to grips with a deeply troubling case discussed in the book under review. While praising the book for its unique phenomenological investigation and its intriguing findings, the reviewer takes issue with the book's proposed approach to the choice-of-law problem. That approach seeks to elaborate detailed rules of choice derived from actual cases studied in large statistical samples, modifying those rules in light of the classical ideals of judicial process: neutrality, uniformity, and certainty. The reviewer, on the contrary, makes bold to argue that the classical ideals of neutrality, uniformity, and certainty in applying law are not only spurious in themselves, but tend inevitably to lead to outcomes that an interest analyst can convincingly evaluate as irrational or unjust. The tenacity of these spurious ideals in legal theory may account in some measure for the intractability of problems of unreason and injustice in the decision of conflicts cases.
Posted by Mary L. Dudziak at 9:09 AM