Jill Lepore, Harvard, has an interesting new review in the New Yorker. She writes, in part:
Daniel Walker Howe’s ambitious new book, “What Hath God Wrought: The Transformation of America, 1815-1848” (Oxford; $35), chronicles every development that Thoreau 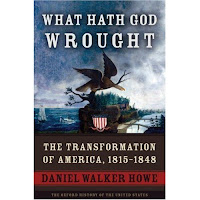 despised, many that he admired, and a great deal about which the man in Walden’s woods cared not one whit. Between 1815 and 1848, the United States chased its Manifest Destiny all the way to the Pacific; battled Mexico; built thousands of miles of canals, railroads, and telegraph lines; embraced universal white-male suffrage and popular democracy; forced Indians from the South and carried slavery to the West; awaited the millennium, reformed its manners, created a middle class, launched women’s rights, and founded its own literature. “What Hath God Wrought” is both a capacious narrative of a tumultuous era in American history and a heroic attempt at synthesizing a century and a half of historical writing about Jacksonian democracy, antebellum reform, and American expansion.
Howe’s book is the most recent installment in the prestigious Oxford History of the United States. This would not be worth mentioning except that the book that was initially commissioned to cover this period, Charles Sellers’s “The Market Revolution: Jacksonian America, 1815-1846,” was rejected by the series editor, the late, distinguished historian C. Vann Woodward, and it is Sellers against whom Howe argues, if with a kind of gentlemanly diffidence. (Oxford did publish Sellers’s book, in 1991, just not as part of the series.) Sellers, a historian at Berkeley, claimed that the greatest transformation of the first half of the nineteenth century—indeed, the defining event in American and even in world history—was no mere transformation but a revolution, from an agrarian to a capitalist society. “Establishing capitalist hegemony over economy, politics, and culture, the market revolution created ourselves and most of the world we know,” Sellers wrote.

Sellers’s energetic, brilliant, and strident book may not have reached readers outside the academy—perhaps Woodward anticipated this—but among scholars it enjoyed a huge influence, not least because “The Market Revolution” was published just after many of the nation’s best historians had written essays sounding urgent calls for synthesis in American historical writing....
Sellers’s was the thesis that launched a thousand dissertations; evidence of the market revolution seemed to be everywhere; it seemed to explain everything. In “The Market Revolution Ate My Homework,” a thoughtful essay published in Reviews in American History in 1997, the historian Daniel Feller observed that “a monograph that presupposes a market revolution will certainly discover one.” His caution went unheard.

So it is a rare and refreshing kind of heresy that Daniel Walker Howe, who studied briefly under Sellers at Berkeley in the nineteen-sixties, and who is best known for his 1979 book, “The Political Culture of the American Whigs,” refuses to use the term “market revolution” in his grand synthesis. (Signalling his quarrel with the other recent sweeping interpretation of this period, Sean Wilentz’s pro-Jackson “The Rise of American Democracy,” Howe dedicates his book to the memory of John Quincy Adams, Jackson’s political nemesis, and avoids using the phrase “Jacksonian America,” on the ground that “Jackson was a controversial figure and his political movement bitterly divided the American people.”) Howe has three objections to Sellers’s thesis. First, the market revolution, if it happened at all, happened earlier, in the eighteenth century. Second, it wasn’t the tragedy that Sellers makes it out to be, because “most American family farmers welcomed the chance to buy and sell in larger markets,” and they were right to, since selling their crops made their lives better. Stuff was cheaper: a mattress that cost fifty dollars in 1815 (which meant that almost no one owned one) cost five in 1848 (and everyone slept better). Finally, the revolution that really mattered was the “communications revolution”: the invention of the telegraph, the expansion of the postal system, improvements in printing technology, and the growth of the newspaper, magazine, and book-publishing industries....
Howe, quoting Samuel Morse quoting Scripture (Numbers 23:23), asks more or less the same question: “What hath God wrought”? Howe’s debate with Sellers is provocative and important because the answer to this question ought to explain, or at least illuminate, the historical relationship between capitalism and democracy. The so-called consensus historians of the nineteen-forties and fifties argued that the seeds of capitalism “came in the first ships” and were planted on American soil by the earliest Colonial settlers. With this, Sellers and Howe disagree, but differently. For Sellers, capitalism is the imported kudzu strangling the native pine of democracy. For Howe, capitalism is more like compost, feeding the soil where democracy grows.
Continue reading here.
Posted by Mary L. Dudziak at 6:35 AM