Daniel Kanstroom, a leading immigration law scholar and lawyer at Boston College, places current immigration policy in a historical context in a post on History News Network:
Much current immigration debate seems based on two misconceptions: one factual, the other theoretical. As talk has increasingly turned from structured work programs with pathways to citizenship to border control and national security, one often gets the impression that virtually no enforcement is taking place. Quite the opposite is true: we are in the midst of a massive, decade-long deportation experiment that is exceptionally harsh by virtually any historical or comparative measure. Indeed, many millions of non-citizens, their families, and their communities have already felt the dreadful power of this system. A second misconception is more subtle, but perhaps more pernicious 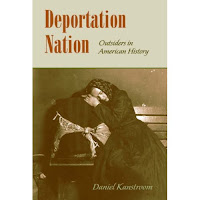 : it is the idea that the “rule of law” embodies only punishment for mis-deeds, rather than proportionality, procedural fairness, and the rejection of Draconian “one size fits all” solutions to complex social problems.
The rest is here.
For more from Kanstroom, see his new book, Deportation Nation: Outsiders in American History (Harvard University Press, 2007).
Here's what Mae Ngai, Columbia, had to say about it:
Kanstroom's legal and social history of deportation reveals the development of a second system within our immigration politics, one of exclusion and expulsion, in which few if any Constitutional protections exist. Kanstroom shows the connections between the deportation of aliens and other removal practices in American history; the warning out of the poor, native-Americans removal, and fugitive slave law-- and makes a powerful and unsettling argument about the uses and abuses of today's immigration system.
Posted by Mary L. Dudziak at 9:32 AM