Books on Erotica, Mrs. Dred Scott, and Levittown in the book pages 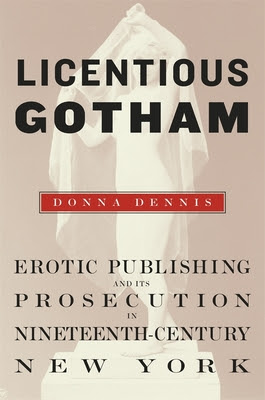 ntury of Sex and Sin in New York City by Kat Long are reviewed by Susan Dominus in the New York Times. "There’s a great history of racy entertainment covering itself, if scantily, in a cloak of righteous education," she writes. Long's book is

less a catalog of vice than an analysis of attempts to evade its suppression. Long promises at the outset that the book will demonstrate that "the agents for good and evil, in New York especially, are symbiotic."...Long also chronicles the way that initiatives to eradicate vice only helped pave the way for its further evolution in the city.

“By the early 1840s,” Dennis writes, “a prolonged economic depression and widespread unemployment stemming from the Panic of 1837 helped unravel the old-line elites’ monopoly on political power and u

sher in an age of mass party politics.” A sign of the changing times, she argues, was the rise of flash weeklies that catered to proto-Maxim rakes who were sexually brash and often mingled with the demimonde....Dennis traces the ways in which provocative material was passed off as edifying, like the guides to the city’s prostitutes that purported to steer unknowing rubes away from their clutches. And she also notes that prohibitions of one sort of racy material only led to another innovation, often more popular than the first.

The rest is here. Hat tip.
MRS. DRED SCOTT: A Life on Slavery's Frontier by Lea VanderVelde is reviewed by Martha A. Sandweiss in the Washington Post. "Previous historians have examin 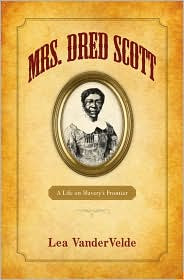 ed the life of Dred Scott for clues that might explain the timing of his lawsuit and his stubborn perseverance in the courts," Sandweiss writes.

But in "Mrs. Dred Scott," University of Iowa law professor Lea VanderVelde argues that the real impetus for the legal case came from Dred's wife, Harriet, a woman heretofore all but unknown. Originally a co-plaintiff with her husband, Harriet watched her case become subordinated to his as the lawsuit moved through the appellate process....

In a remarkable act of historical recovery, VanderVelde resurrects the life of Harriet Scott. As a woman, a slave, an illiterate person and a resident of a frontier community, Harriet left few traces in the historical records. But drawing largely on the diary of Lawrence Taliaferro, the Indian agent and slave owner who brought the teenaged Harriet with him from Pennsylvania to Fort Snelling in Wisconsin (later Minnesota) Territory in 1835, VanderVelde recreates the world in which Harriet lived before her marriage to Dred in 1837.

a remarkable world it was.

Continue reading here.
Levittown: Two Families, One Tycoon, and the Fight for Civil Rights in America's Legendary Suburb by David Kushner is taken up by Eric Arnesen in the Chicago Tribune. The author's focus "is neither suburbia in general nor Levittown in particular, both of which have attracted considerable scholarly attention over the years," Arneson writes.

Rather, he focuses on the experiences of two families, one black, one white, to draw attention to one overriding feature of suburban life: its all-white character. In the postwar years, builders such as the Levitts declared their communities off-limits to African-Americans. Their developments' all-white character, they insisted, would attract working- and middle-class residents who appreciated racial homogeneity and sustained property values. In highlighting racial discrimination in postwar housing, Kushner is covering familiar ground. But his storytelling techniques capture a drama that is often lacking in academic studies.