What Caused the Supreme Court to Change its Mind on the Flag Salute? 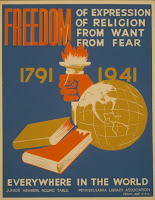 The question of causation is notoriously difficult to assess, in law as in history. The legal system's goals of fashioning incentives just-so and compensating injured parties demand that participants assign responsibility. Judges and juries identify the "proximate cause" or "motivating factor" because, in a sense, they must. In history, no normative enterprise need constrain one's investigation of cause and effect. Often, one can be satisfied by merely showing that some underappreciated factor had a part in human affairs.

When it comes to constitutional history, pressing a bit harder on the relationships among causal factors can yield insights as to how the political order operates. We might wish to know the relative power political and legal actors have in practice, the social conditions under which an influence on the law can be exerted, and the tools available for acts of constitutional meaning-making and transformation.

A fascinating case study can be found in the U.S. Supreme Court's switch on the constitutionality of the coerced flag salute in the early 1940s. As America geared up for war, the Justices originally held in Minersville School District v. Gobitis that national unity counseled against recognizing a First Amendment right to refuse to salute the American flag. Three years later, the High Court abruptly reversed course, concluding in the famous Barnette case that respect for pluralism and individuality favored vindicating the Jehovah Witnesses' claim.

What best explains the sudden change? Two of the stronger explanations for the switch involve the wave of terror against Jehovah's Witnesses after the first ruling, vividly documented by Shawn Francis Peters; and changes in the Court's personnel in the intervening years (as analyzed in numerous judicial biographies).

In Reconsidering Gobitis: An Exercise in Presidential Leadership, which is hot off the presses, I offer an alternative account: the extra-judicial words and deeds of the Roosevelt administration played a significant role in the Supreme Court's turnabout. These actions signaled that the right of conscience was a presidential priority and framed such a right as the legacy of a just war. No brief was filed by the United States government in either lawsuit, but archival documents show that Robert Jackson kept FDR apprised of developments in Barnette. Department of Justice lawyers authored an article laying the extra-legal violence against the Jehovah's Witnesses squarely at the feet of the Supreme Court, urging the Justices to undo the damage by reversing themselves, and suggesting that such a corrective would implement the president's agenda, "The Four Freedoms." Speeches by key aides emphasized religious liberty and conscience, all while denying public support to Gobitis; these speeches were prominently quoted by the litigants. Finally, Robert Jackson's early drafts of Barnette suggest that the Justices and law clerks were aware of these executive branch efforts, though most of these references were later excised or downplayed during the opinion writing process, effectuating an erasure of presidential action.

Who has the better of the historical argument? What lessons can be drawn if we view this sequence of events as a sophisticated exercise in what Keith Whittington calls "political construction" of the Constitution?
Posted by Robert L. Tsai at 12:20 PM