The Law Clerk's Memo to Robert Jackson in Barnette 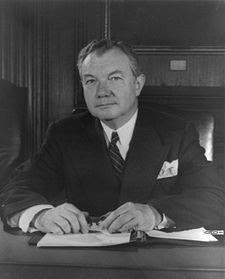 One of the more fascinating documents in Robert Jackson's files on West Virginia State Board of Education v. Barnette is an undated memo from "JFC"—Jackson's first law clerk brought over from the Department of Justice, John F. Costelloe.

One idea suggested by Costelloe involves when courts ought to permit an individual a First Amendment exemption from an otherwise valid law. Costelloe wonders how to protect rights without interfering with the "many items of school discipline which will inevitably offend the tastes of students"—a concern that bedevils jurists to this day. He proposes a kind of "substantial difference" test: "a minimal requirement for refusal to salute the flag in a public school should be a showing of difference in political, ethical, or religious opinion to a degree which may fairly be called substantial." Given his mention of political and ethical objections, Costelloe envisions an approach that could be adopted in contexts beyond the flag salute. Jackson apparently resisted this suggestion and finessed the standard.

Another set of comments establishes that some members of the Supreme Court and their clerks were aware of, and found important, certain extrajudicial events and perspectives. First, Costelloe advises Jackson that it is possible to describe the persecution of the Jehovah's Witnesses as a perversion of Gobitis, and not in any way sponsored by the Court: "Because lawless mobs may have misunderstood its meaning is not in itself a reason to change it." This comment echoes one separately made by Chief Justice Harlan Fiske Stone. But notice that these criticisms help to explain why the final opinion downplays the extent of the persecution, but they do not disprove that out-of-court events affected the Justices' thinking. Nor do the changes to the text alter the likelihood that Jackson himself believed that Gobitis bore some responsibility for certain anti-democratic attitudes and behavior.

Second, Costelloe refers to the "June 16, 1940 radio address [in which] Solicitor General Biddle said that the Attorney General had ordered that an investigation be commenced." A reference in the opinion to this speech was later deleted.

Third, Costelloe endorses Jackson's plan to cite to the article by Victor Rotnem and F.G. Folsom, Jr., two lawyers from the Civil Rights Division of the Department of Justice—which I have called an unofficial amicus brief. Costelloe notes that the article "contains many statements of opinion quite inapposite to a formal report by a governmental agency or statement by a governmental opinion speaking in that capacity," and that it is therefore "intended more for advocacy than for exposition." Even so, he concludes: "I should think that it would be desirable to indicate the position of these gentlemen in the Department of Justice." Though Jackson and others likely read and considered DOJ's extrajudicial appeal, this reference was excised from the opinion before publication.

Fourth, the law clerk "think[s] it would be well to work into the opinion rather exhaustive references to the secondary materials on the Gobitis case. The list of Gobitis haters begins with Powell, . . . and continues until we reach the anonymous student notes. Their practical unanimity is, I think, of some significance and possibly of some help." These out-of-court writings make the final cut. Why cobble together all of these sources unless you are trying to suggest one consensus has rapidly eroded and another has emerged—supported by thoughtful Americans, including members of the Executive Branch?

Inspect this and related documents at the Library of Congress's Manuscript Reading Room.