Have You Read John Brown's Constitution? 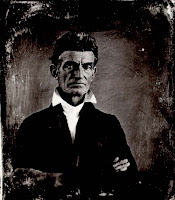 I am working on a book-length project on forgotten and failed constitutions in the American tradition, which will give greater attention to these instances and through which I hope to theorize a broader set of reasons why citizens are moved to write political liberation documents. It turns out that Americans write even when there is little hope that their creations will become the authoritative texts of the nation.

This seems true of the John Brown group, which led a failed assault on Harper's Ferry in 1859. Well before this ill-fated escapade, Brown authored texts to govern his volunteer force, including an analogue to the Declaration of Independence. A year or so before the raid, Brown convened a convention in Chatham, Canada, and ratified a Provisional Constitution. He believed in separation of powers, racial equality, and the humane treatment of prisoners. Despite Brown's attacks on Dred Scott, the document endorsed judicial review, albeit implemented by a 5-member Supreme Court. It lacked a separate Bill of Rights, though certain principles, institutions, and practices were to be respected. All persons agreed to put themselves "under obligation to labor" and the community believed in gun rights as long as arms were carried openly (certain high officials excepted). Read the entire Constitution for yourself here.

Every so often, members of the group would pull out the document and read it aloud. They would ritually recommit to its principles, as they did before setting off for Harper's Ferry. Once Brown was captured and tried by the Commonwealth of Virginia, he declined opportunities to disavow the Provisional Constitution, notably, by resisting his lawyers' advice to point to the document in a bid to demonstrate insanity.