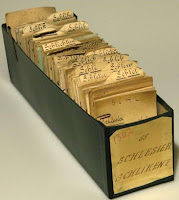 I thought I'd follow up Emily Kadens's excellent posts on working in archives (for instance, here and here) with some thoughts about conducting archival research in presidential libraries. So far I have visited two--Franklin D. Roosevelt's in Hyde Park and Lyndon B. Johnson's in Austin. It definitely pays to plan ahead by examining online finding guides, especially if you are working under severe time constraints. Unlike the Library of Congress, the archives at presidential libraries tend not to be open on Saturday. The FDR finding aids and photo libraries are searchable. The LBJ library has an extensive oral history collection (you can listen to a few, but not all, of the recordings without visiting the library).

Before the staff lets you touch anything at the LBJ library, they sit you down with a specialist to go over the rules for handling the documents and how information is organized. This wasn't required by the FDR library, but I think a brief orientation is not a bad idea. From somewhere around the time of President Kennedy onward, the system for organizing presidential documents changed dramatically. For example, I discovered that "human rights" became an umbrella category "used for all material pertaining to human and civil rights, the promotion and denial of such rights, discrimination, or discriminatory practices, and matters relating to segregation, ideologies, and voting rights, including all complaints about such matters." So, after having just learned how things were cataloged at the FDR library, I had to learn a completely new archival system.

Both presidential libraries required researchers to identify the documents intended for copying, using fairly standard procedures. At the FDR library, one had to show each file to the librarian for examination, but copies could otherwise be made by the researcher. I enjoyed running my hands over the various drafts of Roosevelt's "Four Freedoms" speech, including the president's handwritten peroration with the memorable repeating line, "everywhere in the world," as well as finding proof that he was a card-carrying member of the American Legion. At the LBJ library, one could snap photos of the documents (you could even rent a camera), but copies had to be made by the library's copy service. It ended up taking a few months for my copies to arrive in the mail.

One of my happier discoveries was that some presidential libraries allow you to bring in a scanner. This appeared to be true of the FDR library (though just to be safe, I would call ahead to get confirmation because the research policy states that "computers" are allowed but makes no specific mention of scanners). I watched as an enterprising Georgetown student, working on her senior thesis, happily scanned document after document and uploaded them straight to her computer. I vowed then and there to become just as technologically savvy—hopefully, by the time I returned.