More Audio on the Web

Looking (unsuccessfully*) for an image of Louis Jaffe to illustrate my lecture tomorrow, I stumbled onto the "Past Speakers" page of the Harvard Law School Forum. Most entries lack of audio but some have downloadable files that I've been able to play on RealPlayer. (Pauli Murray comes through loud and clear.) Here's a sample of what you'll find if you scroll down the page: 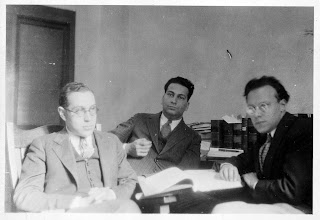 *Update: Thanks to David Warrington, I had my image of Louis Jaffe in time for class. Here he is (left), with Paul Freund (center) and "Feller" (left). I assume the Feller in question is Abe, not Bob. The caption is "Three graduate students"--that is, at the Harvard Law School. It is dated 1931-32.

Image credit.
Posted by Dan Ernst at 1:32 AM