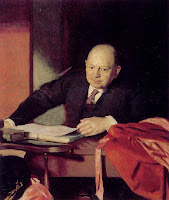 The posting by Perry Dane, Rutgers-Camden School of Law of his biographical entry on Joseph Henry Beale, the high formalist scholar of conflict of laws, gives me an excuse to reproduce Thurman Arnold's poetical mock tribute (which Dane quotes in part) and to post the terrific portrait by Charles S. Hopkinson. Here's Dane's abstract.

This short entry in the Yale Biographical Dictionary of American Law, edited by Roger K. Newman, discusses Joseph Henry Beale, Jr. (1861-1943), Royall Professor of Law at Harvard Law School and the founding dean of the University of Chicago Law School. Beale is best remembered for his work on conflict of laws, which was the highest expression of a decidedly formalistic approach to the subject, and the foil for the Legal Realist critiques that eventually overturned that formalism.

Beale's work on conflict of laws spanned much of his career, culminating with his 1935 treatise and with the First Restatement of Conflict of Laws, for which he was the reporter. His approach emphasized mechanical rules based on identifying specific, territorially defined, rights-creating events, and was already the object of sustained attack by the time these publications appeared. Legal Realist opponents battered his notions of territorially defined vested rights, and their critique ultimately led to a revolution in choice of law. More profoundly, Beale's work became for many the emblem of antiquated formalism in legal thinking.

Such criticism aside, however, Beale grounded his approach in sophisticated, if debatable, jurisprudential assumptions. He was a more subtle thinker, widely read in foreign sources and interested in legal theory and history, and often a more wry and ironic writer than the caricature would allow. A surprising number of his writings, which ranged widely from criminal procedure to taxation and municipal corporations, paid heed to social facts and legal adaptation.

Beale was an interdisciplinary thinker in his own way and was more jurisprudentially self-conscious than most American legal scholars of his generation. Indeed, there is no better evidence of his intellectual breadth than his commitment to conflict of laws, which Beale introduced to the law school curriculum and put at the center of legal scholarship.

Here's Arnold's poem, which I quote from Laura Kalman's Legal Realism at Yale:

Beale, Beale, marvelous Beale,
Only in verse can we tell how we feel,
When our efforts so strenuous to overthrow,
Your reasoning tenuous, don't seem to go.
For the law is a system of wheels within wheels.
Invented by Thayers and Sayres and Beales,
With each little wheel so exactly adjusted,
That if it is damaged the whole thing is busted.
So cease from refuting what can't be disputed,
Abandon disputing what can't be refuted,
And BOW to the frantic pedantic romantic
Evasive, persuasive, marvelous Beale.

Finally, I was surprised to learn recently that Beale taught a boundary busting course combining Torts and Criminal Law in a search for common principles of "legal liability." (Harvard Law Review 28 (1914): 83.) As a participant in a long-running alternate curriculum for the first year at Georgetown, I knew of course that we had precursors, including the "Contorts" course at Rutgers-Camden. Even so, it was a little hard to discover that a high priest of legal formalism had been there before us.

Update: Thanks to David Warrington, Special Collections Librarian at the Harvard Law School, for sending me another poetical tribute to Beale by one of his students. This one is from Francis T.P. Plimpton, Reunion Runes: Being Verses Read at the 25th Reunion of the Harvard Law School Class of 1925 on April 29, 1950 (1950), 22. [N.B.: Joy = Joey.]

Now Beale received from Cambridge U
(He earned it at a canter)
A flowing gown of crimson hue
With scarlet tam-o-shanter,

Which flops about that noble brow --
And looks! Unless you saw his,
You really can't imagine how
Undignified the law is.

Joy tends to be a mite severe
In classroom conversation,
But it would do you good to hear
His ratiocination.

The ones that argued--how they cried!
You really should have heard 'em,
As he with banging fist applied
Reductio ad absurdum.

He calls upon his learning wide
And uses perfect diction,
As with a solemn quiet pride
He justifies a fiction.

Bewildered pupils hear with awe
His logic unrelenting,
As he with force lays down the law--
With Justice Holmes dissenting.

I'll tell you this--you'd better know
It now as well as later--
When Joy asserts a thing is so,
It's res adjudicata.

As David points out, the "flowing gown of crimson hue" appears in the Hopkinson portrait.
Posted by Dan Ernst at 2:54 PM