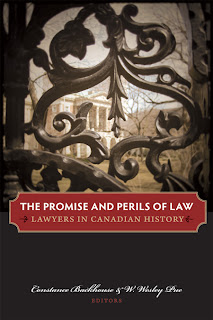 Recently published is The Promise and Perils of Law: Lawyers in Canadian History, a collection of essays edited by Constance Backhouse, University of Ottawa, and W. Wesley Pue, University of British Columbia. According to the publisher,

The papers that make up this volume were produced on the occasion of the 175th anniversary of the opening of Osgoode Hall, one of Toronto’s landmark buildings. This event presented a unique opportunity for reflection on the legal profession and its role in Canadian history. The “legal profession” is simultaneously a trade organization, a corporate ideology, an important cultural actor, and an aggregation of individuals known both for their zealous pursuit of their clients’ interests and for their assertive individualism. This book offers essays that seek to add to the understanding of Canada’s legal profession and to provide a background to inform conversation concerning its past, present, and future.

Here is the summary table of contents:

2. An Introduction to Osgoode Hall on the Occasion of its 175th Anniversary: More than Bricks and Mortar. Deidré Rowe-Brown

6. Megafirm History: Past and Present of the Large Law Firm in Canada. Christopher Moore

8. The Legal Profession and Penal Justice in Quebec City, 1856–1965: From Modernity to Anti-Modernity. Donald Fyson

9. The Court and the Legal Profession: Loyalist Lawyers and the Nova Scotia Supreme Court, 1785–1790. Jim Phillips

12. If Your Life is a Leaf: Arthur Eugene O’Meara’s Campaign for Aboriginal Justice. Hamar Foster

14. “A Revolution in Numbers”: The Formative Years for Ontario Feminist Lawyers, 1970–1990. Constance Backhouse

Update: A newspaper column drawing upon Professor Backhouse's chapter is here.
Posted by Dan Ernst at 2:09 AM