This is the second in a series of invited guest posts by Sally Greene on newly found archival documents related to the landmark slavery case, State v. Mann. Greene's first post is here. 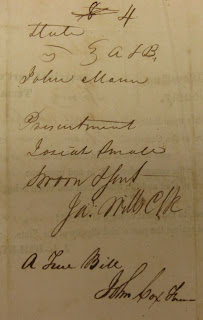 The file folder containing the crucial “missing” documents in the case of State v. Mann was hiding in plain sight, but it was the hand of an extraordinary archivist, George Stevenson, that led me there. I knew that Stevenson had worked closely with Jean Fagan Yellin, helping her establish that Incidents in the Life of a Slave Girl was the actual autobiography of Harriet Jacobs, not the fabrication of her white editor Lydia Maria Child. Yellin recalls in her biography of Jacobs how Stevenson first had to convince himself that Yellin’s story was right. He worked a whole night through to see if her theory of the identity of Jacobs’ father was correct. After those facts panned out, he was committed to the project for what turned into years of detective work. By the time I got Stevenson’s attention he was near retirement, but I too gained the benefit of his encyclopedic knowledge of the holdings of the North Carolina State Archives. It didn’t hurt that State v. Mann had arisen in Chowan County, in Edenton to be precise, the home of Harriet Jacobs.

The file would not be within the main section of criminal action papers for Chowan County, Stevenson told me. He directed me to a tab near the back of the drawer, the one labeled “Miscellaneous.” Among those index cards was a category called “Slave Records,” and within that category were “Criminal Actions Concerning Slaves,” organized by year. (This whole category of “miscellaneous,” by the way, was absent from the online finding aid.)

In the folder for 1829, at the top of the stack, lay the grand jury indictment of John Mann, accompanied by his arrest warrant, recognizance bond, and several subpoenas. What a moment! Tangible documents, new names, a slim thread of new evidence, new clues. Where would they lead? I knew that the trail of the slave Lydia’s owner, Elizabeth Jones, had grown cold; if she had left obvious records in Chowan County, someone would have found them by now. I certainly had not identified her. The presentment to the grand jury was sworn out not by anybody named Jones, but rather by a Josiah Small. Who was he, and what relation did he bear to Elizabeth Jones? My husband took a guess. Could Elizabeth have been a minor, and Small her guardian? I proposed this question to Stevenson. He was skeptical.

But as with Jean Yellin’s hunches, he decided to do his own test. He called the next day to confirm: court records showed that Josiah Small was the guardian of James, Elizabeth, and August Jones. From there it was a short step to the discovery that their father Thomas Jones had died intestate in 1822. An older child, Matilda, was married to Josiah Small; these three minor children became his wards. Further records showed that an enslaved woman named Lydia, age 16 at the time of Jones’ death, became part of E 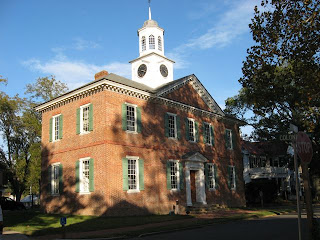 lizabeth’s inheritance, property that Small was duty-bound to keep hired out. (Small was from a Quaker family, but this doesn’t seem to have colored how he felt about slavery.)

And so began a long, fascinating journey. Tedious hours of sleuthing in the archives in Raleigh were balanced by a few memorable trips to Edenton, where much of the antebellum landscape is preserved, including the courthouse where John Mann was tried.

Here’s some advice for anyone lucky enough to have an archival project:

1. Make friends with archivists, for they can be true friends of yours. Do some advance work to make sure you are talking to the most qualified archivists in your
field.

2. Do not neglect the “miscellaneous.”

3. Do not rely entirely on online finding aids.

4. Go out on limbs and follow all hunches (then test them against facts).

6. Enjoy. (And come up for air occasionally.)