Religious History most prominent among members of American Historical Association

Following the recent debate about whether new areas of historical scholarship have edged out "traditional" fields, it is interesting to see the new membership data from the American Historical Association, the largest U.S.-based organization representing historians. A post on AHA Today is titled: AHA Membership Grows Modestly, as History of Religion Surpasses Culture. Robert Townsend writes: "Despite the hardships in the economy, membership in the AHA actually increased slightly over the past year. In our annual membership snapshot (taken on March 31 of each year), membership rose to over 1 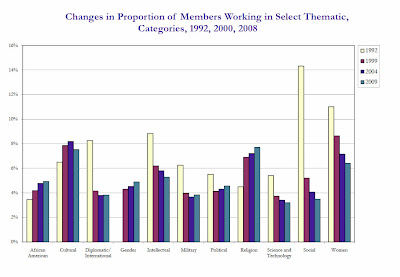 a troubling loss in the number of members in many of the higher dues-paying categories, as many faculty members and professional historians felt the effects of the economy. These losses were only offset by significant gains in the number of student members (whose memberships are subsidized by senior members). Students now comprise 28.2 percent of the membership—the highest proportion since 1996, when they accounted for 32.0 percent of the membership.

Yet "the most notable change in the profile of our membership is the continuing rise of specialists in religious history." Townsend continues:

More members selected the history of religion as field of specialization (7.7 percent in all) than any other thematic category. Religion surpassed cultural history (selected by 7.5 percent of the membership), which has been the most popular subject category among members for more than 15 years. (Cultural history eclipsed social history as the field of choice in the mid-1990s.)

Members specializing in the history of religion were working in most of the geographic categories, but the highest proportions seemed to be studying early European or recent U.S. history.

According to the accompanying graph (reproduced here), since 2004 hiring in most subfields is down. Besides religion, hiring was slightly increased in the areas of African American, Gender, Military, and Political history. It was flat in Diplomatic/International history. Legal history is not included in the graph.
More details are here.
Posted by Mary L. Dudziak at 8:10 AM